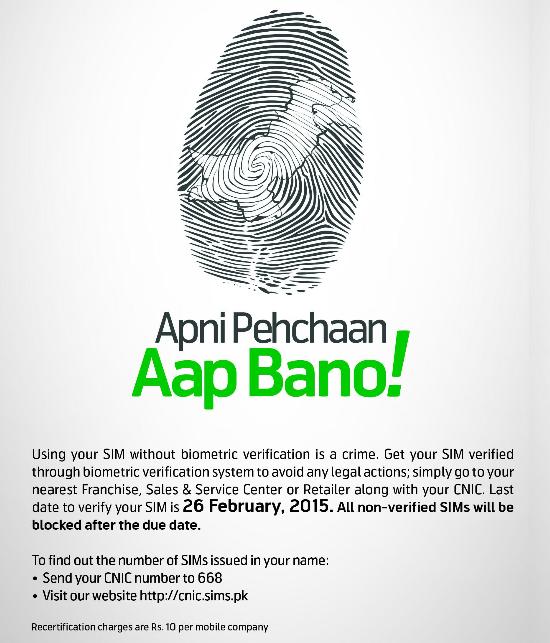 UPDATED. 47.4 Million SIMs has been verified and 5.6 Million blocked

After the launching of the campaign of Biometric Verification System (BVS), so far 47.4 million SIMs has been verified, against 35.6 million CNIC, while 5.6 million SIMs were blocked so far. 26th February is dead line.

After the launching of the campaign of Biometric Verification System (BVS), so far 41.2 million SIMs has been verified, against 30.6 million CNIC till Friday 13th February Evening, while 4.5 million SIMs were blocked. Reaming more than 60 million have to verified till 26th February. The reliable source informed Telecoalert.com that companies position are same Telenor get more verification than others.

According to sources in Pakistan Telecom Authority, it has been revealed to TelcoAlert.com that facilities will be given to consumers that are looking forward for SIM re-verification however the deadline will not be extended.  These include

1)      Those consumers that don’t have their thumbprint impressions in NADRA database will be able to use online kiosks on franchises to update NADRA.

2)      Elderly consumers will be helped by separate queues and special treatment.

3)      There will be no extra charges at retailers and only charges that have been set by PTA will now be effective.

NADRA and its systems are under pressure due to the huge amount of information that is being processed. For that reason different proposals are being considered to relieve the pressure.

Overseas Pakistanis can now get their SIMs verified through their close relatives by passing them the relevant information. They will be given temporary re-verification and they will be able to get it re-verified in considerable time period.

Lastly it has been stated clearly that any CNIC that has three or more than three SIMs of the same vendor will find its third, fourth and fifth SIM canceled.