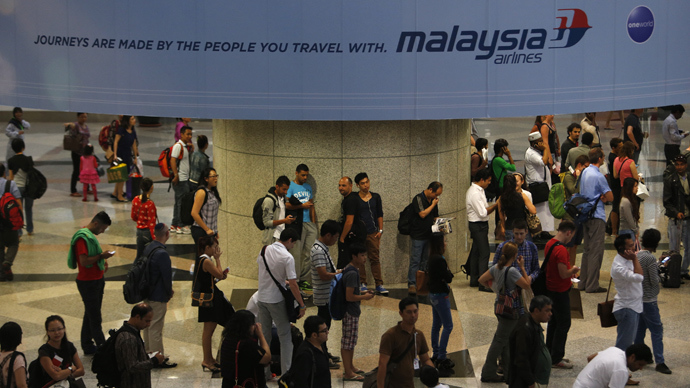 China.org.cn reported 19 families signed a joint statement saying their family members’ cell phones connected, but the calls hung up. Relatives have asked Malaysia Airlines to reveal any information they might be hiding, seeking an explanation for the eerie phone connections. The relatives have complained that the Malaysia Airlines is not responding as actively as it should.

Outrage over the Malaysia Airlines missing jet coverup and resulted in family members throwing objects at officials because they are hiding information learned about the plane that vanished three days ago.

Angry family members threw water bottles at an MAS spokesman and threatened to protest in front of the Malaysian embassy in China if the airline did not “disclose” the “truth,” according to   International Business Times.

Chinese media reports several of the passengers’ mobile phones were connecting when called by relatives, but the calls were not picked up.

“This morning, around 11:40 [am], I called my older brother’s number twice, and I got the ringing tone,” said Bian Liangwei, sister of one of the passengers. At 2:00 pm, Bian called again and heard it ringing again.

“If I could get through, the police could locate the position, and there’s a chance he could still be alive.”

She has passed on the number to Malaysia Airlines and the Chinese police.

“The world is speculating whether the stolen passport holders were terrorists,” while Interpol asks why only a handful of countries world-wide took care to ensure persons possessing stolen passports are not boarding international flights, said Ronald Noble, secretary-general of Interpol on Sunday.

Relatives of the passengers are urging the authorities to search for the location of phones that rang using the  Global Positioning System.

At a press conference in Beijing, however, MAS spokesman Ignatius Ong said one of the numbers that had been passed on to the airline’s command office in Kuala Lumpur failed to get through.

A phone company in Singapore that was investigating this number said the number was out of credit. But that’s only one phone. Numerous relations have provided cell phone numbers of loved ones that they said ring when dialed.