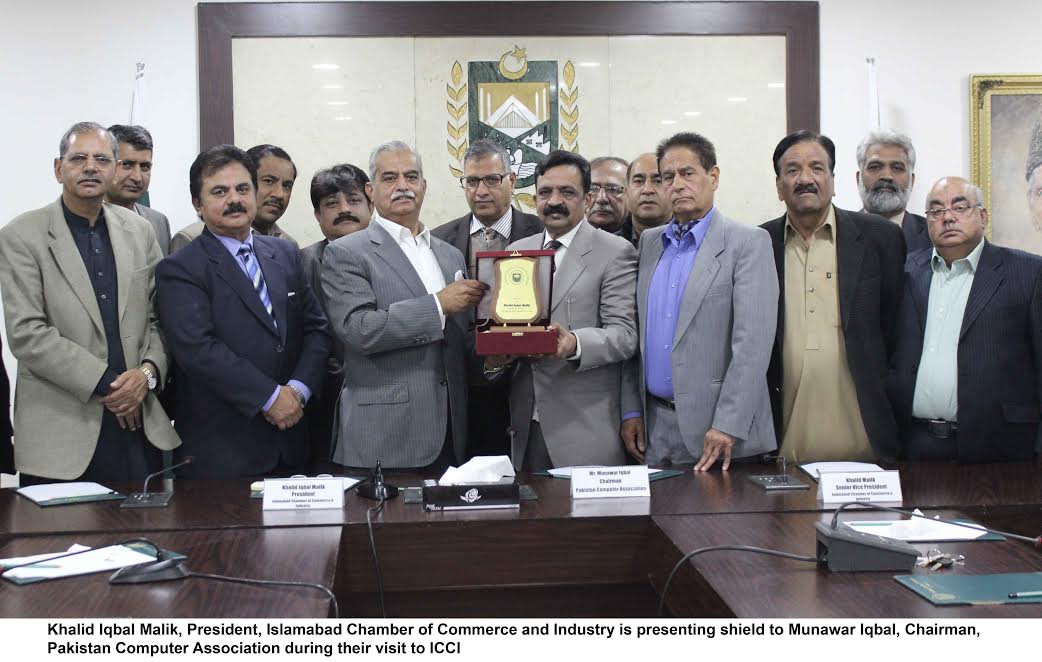 A delegation of Pakistan Computer Association (PCA) led by its Chairman Munawar Iqbal visited Islamabad Chamber of Commerce and Industry and called upon the government to focus on the better development of IT industry that has the potential to stimulate economic growth and promote exports.

Speaking at the occasion, Munawar Iqbal, Chairman, Pakistan Computer Association (PCA) said that the current tax regime was not supportive of IT sector businesses and stressed that government should reform tax policies to facilitate the realization of full export potential of this important sector. He said FBR should reduce high tax rates on IT sector to pave way for its fast growth.

In his welcome address, Khalid Iqbal Malik, President, Islamabad Chamber of Commerce and Industry said that IT industry has the potential to project Pakistan at global level by promoting IT exports and government should give priority attention to resolving its key problems. He said special subsidies and export incentives have proved instrumental in stimulating the growth of world-wide IT sector with very positive spill-over effects on economic growth and government should seriously consider extending similar support to IT industry in Pakistan.

He said with better focus on IT industry, India was earning billions of dollars through IT exports while Pakistan’s IT exports were still far less than its actual potential. He said government should pay close attention to remove hurdles in growth of IT sector. He was of the view that if supported by the government, IT industry could emerge a major source of jobs creation and driver of economic growth in the country.

He informed the PCA delegation that Chairman FBR during his recent visit to ICCI had announced formation of Tax Advisory Committees at LTU and RTO level in Islamabad and hoped that these Committees would be helpful in resolving computer industry issues.

Khalid Malik Senior Vice President, Basharat Baloch President PCA Lahore Chapter, Naeem Siddiqui and others also spoke at the occasion and stressed upon the government to form conducive tax policies for the better growth of IT industry in Pakistan.