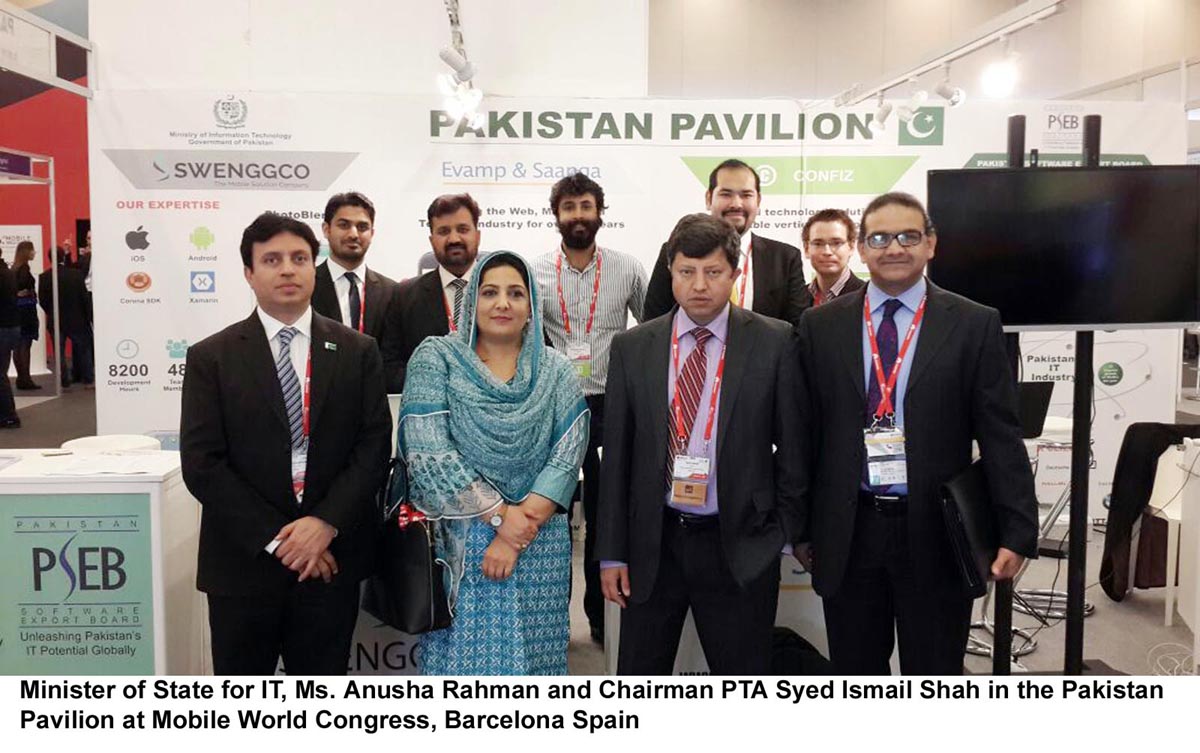 In a very significant development for the telecommunications sector of Pakistan and in recognition of the forward looking progressive policies of the current Government in Mobile Broadband, Pakistan was awarded “Spectrum for Mobile Broadband Award 2015 “ at the prestigious Mobile World Congress 2015 of the GSM Association here in Barcelona Spain. The annual event considered the epitome of telecommunications development and innovation globally brings together leaders from governments, regulators, top industry players and other constituents of the global ICT ecosystem at the annual Mobile world congress. “The award of “GSMA Spectrum for Mobile Broadband Award for 2015” to Pakistan is an indication of the global community reposing its trust in the Telecommunication Sector policy practices of the Government of Pakistan”, said the Minister of State for Information Technology while accepting the award on behalf of the Government of Pakistan. She added that our policies have once again acclaimed worldwide recognition, and is in fact a continuation of Pakistan’s journey during the course of which GSMA once again acknowledged us. The spectrum award which is one of the two annual “Government Mobile Excellence Award” awards is given as a recognition of significant achievement of the government in driving the growth and socio-economic impact of the mobile industry in the country, and demonstration of clear commitment in putting mobile broadband at the top of its digital agendas.
The Minister in her key note address said that in a short span of 6to 8 months since launch of 3G/4G service the mobile broadband subscriptions for 3 g stand at around 10 Million. The Spectrum auction for next generation mobile services has not only enabled the people of Pakistan to gain access to mobile broadband services and be at par with rest of the world in terms of mobile broadband technology, but has also successfully encouraged investment in mobile networks in Pakistan.
The Minister further highlighted that the recent roll out of spectrum for next generation mobile broadband services (3G / 4G) is a step forward towards the achievement of government’s vision of creation of an ‘accelerated digitization ecosystem’, with special emphasis on ‘Bridging Broadband Divide’. Our democratic government accords highest priority to use of ICTs enable socio-economic development across the length and breadth of the country, expanding the knowledge based economy and to spur economic growth. She added that in this regard, the government has accorded highest priority to the development of ICT infrastructure and applications for the provision of quality services, education, employment generation, and women empowerment.
Ms. Anusha Rahman Khan, Minister of State for Information Technology is currently leading a delegation of Pakistan at the annual GSMA Mobile World Congress, being held in Barcelona, Spain. She is accompanied by Chairman Pakistan Telecommunication Authority (PTA) and Managing Director Pakistan Software Export Board (PSEB). Besides other bilateral meetings on the sidelines of the event, the Minister for IT also participated in the Ministerial Roundtable on “Digital Inclusion – Role of e-Government” and shared her plans with the global technology and policy leadership on utilizing the concept of E-governance for good governance and for ensuring all inclusive socio economic opportunity for the people of Pakistan through affordable and innovative ICT services. Ministry of IT has also facilitated PSEB for setting up fist ever Pakistan pavilion at the mobile world congress showcasing Pakistan expertise in IT sector. The Pakistan pavilion attracted lot of attention from visitors.