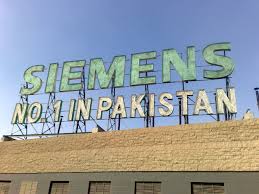 The implementation of the decision was however, subject to the company’s internal appropriate management level approvals, a go-ahead by the board of directors and shareholders; execution of binding agreements and potential purchaser(s) and completion of the related legal and procedural formalities.

Earlier on Sept 30, Siemens (Pakistan), had told investors that the company had agreed “in principle to the sale of company’s land and buildings situated at Estate Avenue, Sindh Industrial Trading Estate Karachi, Pakistan, in one or more parcels”.

The information about the possibility of sale of land and buildings in Karachi, came along with the Siemens (Pakistan) ‘profit warning’: “The company’s profitability for the financial year ending on Sept 30, 2014, is adversely affected by multifarious reasons and as a result the company expects to report loss.” Siemens had told shareholders.

In early March this year, Siemens Pakistan had announced its decision to sell the transformer business. Investors wondered what was going on and if the company on the KSE’s general industrial sector with Rs17 billion in total assets was calling quits to the country.

A person in the know of things, however, said that such was not the case. “Siemens will retain manufacturing rights of transformers of certain specifications,” he asserted.

The remaining business in transformers was proposed to be sold with a couple of buyers already engaged in conducting the due diligence. Siemens was likely to cease much of the manufacturing activity as it thought it unfavourable in the face of shortage of power, water and an uncertain law and order situation particularly in Karachi, he said.

He thought that the company would continue to sell the Siemens products manufactured outside Pakistan.

An old-timer at the market lamented that once a landmark facility for manufacturing heavy electrical engineering products in Karachi’s SITE industrial area, Siemens had lost its glory. For FY13 the company had incurred loss before tax amounted to Rs821m with net sales down to Rs13bn, from Rs13.8bn the earlier year.