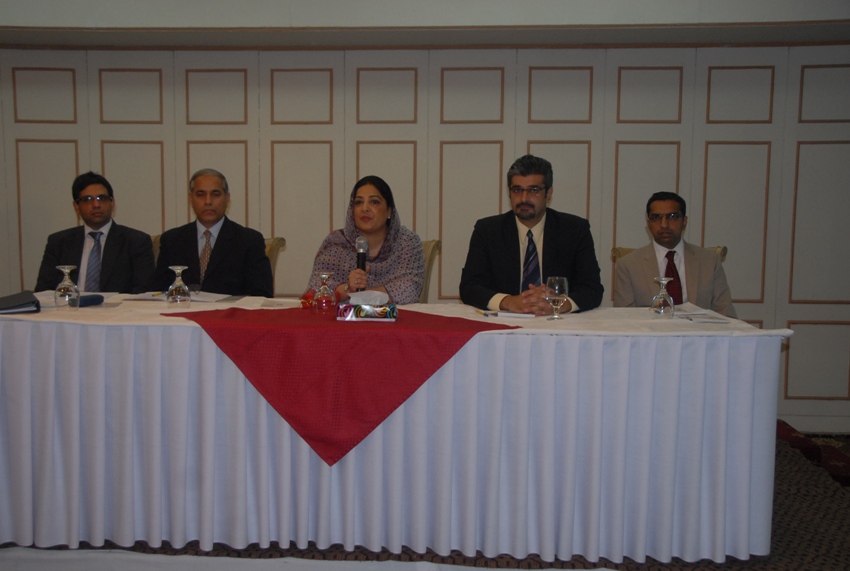 The Minister specifically discussed the matter of duplicate IMEIs and issues associated with it. The forum proposed that PTA might conduct a survey to ascertain the gravity of matter and hold consultations with the mobile operators to formulate a framework to discourage malpractices of duplication of IMEIs and use of stolen handsets on mobile networks. The Minister instructed PTA to conduct the survey and run awareness campaigns to inform general public about their type approval regime. It was informed by PTA that list of type approved handsets was present on its website for information of general public so that they buy legally approved handsets.

Highly productive sessions were concluded regarding consultation on draft telecom policy being hosted by Ministry of IT. The draft policy was presented to the stakeholders and discussions took place on various aspects of the policy. The draft policy has included various new elements like satellite communication, spectrum strategy, spectrum harmonization, spectrum trading,net neutrality, Over the Top services, competition framework, Wi-Fi hotspots, local manufacturing etc., which were not present in earlier policies. The draft was well received by the stakeholders.

Mrs. Anusha Rahman, Minister of State for IT chaired the sessions which gave confidence to the stakeholders regarding commitment of the government to facilitate and promote the telecom sector.  The workshop sessions were held on 14-15 October 2014 at Margala Hotel.

The Minister specifically discussed the matter of duplicate IMEIs and issues associated with it. The forum proposed that PTA might conduct a survey to ascertain the gravity of matter and hold consultations with the mobile operators to formulate a framework to discourage malpractices of duplication of IMEIs and use of stolen handsets on mobile networks. The Minister instructed PTA to conduct the survey and run awareness campaigns to inform general public about their type approval regime. It was informed by PTA that list of type approved handsets was present on its website for information of general public so that they buy legally approved handsets.

She also emphasized that quality of services standards should be maintained and consumer protection should be the focus of operators.

The draft policy has also mentioned the alleviated role of Universal Service and ICT Research & Development Funds. It was observed that those funds were underutilized previously. The Minister enlightened the participants regarding programs of establishing tele-centres and extended deployment of fibre optic across Pakistan through Universal Service fund.  Tele-centres will host biometric SIM verification facility, NADRA services and three e-services by respective provincial governments. 500 such centres are planned in first phase. Regarding utilization of ICT Research & Development Fund, the Minister viewed that the research going on in Pakistan should be aligned with international research activities and products so developed should cater for the local and international demand. Earlier, these decisions had been made by respective Boards of Universal Service and ICT Research & Development chaired by the Minister. During discussions, it was highlighted that in the wake of 3G/4G spectrum auction, there was a need to develop local content and applications to be used in general and specifically in the tele-centres to enhance social sector development and to achieve ubiquitous use of ICT services. The Minister responded that ICT Research & Development Fund was already tasked to facilitate such development. On content development, the participants also suggested that there was a need to curtail duplication in content development and highlighted a need of common platform to standardize and discuss the requirements of content.She also expressed her interest in increasing the usage of telecom services for social sector like telemedicine, e agriculture, e learning, e secuiroty etc.The participants appreciated the steps being taken by the Ministry in respect of Funds and particularly the tele-centreproject while suggesting to consider further the sustainability aspect of the tele-centres.

While discussing the role of ICT Research & Development Fund, Minister also shared the findings of Performance Audit of technical projects funded by the Fund since 2007 with the participants.

The participants were also informed by the Minister about the initiative of local manufacturing by the Ministry. Negotiations with Chinese companies are at advanced stages and team of the Ministry will possibly visit those companies in November this year. She also broke news regarding possibility of funding of US$ 50 million by Korea for establishing technology/IT parks.

The competition framework indicated in the draft would lead toavailability of variety of services at affordable rates to the people. To give certainty to the telecom sectors, the draft has special mention of spectrum rolling plan and licensing regime.

The draft policy has integrated the fixed line, mobile and broadband policies which were issued separately in 2003 and 2004 respectively. The revisions of these policies were due since last 6 years.Minister for IT, Mrs. AnushaRahman, took note of the delay and put this matter on her priority agenda.

Earlier, MoIT engaged the services of professional and experienced international consulting form for the assignment through the World Bank assistance. The consultant after initial consultations with the stakeholders produced an initial draft which was circulated for feedback from stakeholders in July 2014. In the light of feedback received and deliberation of Ministry, PTA and FAB, the draft was modified and circulated as a new draft.These workshops have discussed the new draft. However, opportunity will still be provided to the stakeholders to provide further comments to improve the draftbefore its finalization by end November.

Ministry of IT holds interactive consultative sessions with stakeholders on new draft of telecom policy which was made available for views and comments earlier this month. Two day workshop (14-15 October) is being held at Hotel Margala Islamabad. The first day was attended by telecom operators, PTA, FAB and several other relevant stakeholders. All stakeholders showed contentment over the consultative process being adopted by the Ministry.

During the sessions, the international consultant engaged by the Ministry for the purpose presented salient features of the draft policy to the participants. These features include policy goals, licensing regime, market structure etc. Participants generated debates and raised various queries which were responded by the Ministry’s team and the consultant.

Minister of State for IT also attended one of the sessions and invited the participants to candidly provide their views to make the exercise objective and conclusive. She said that the policy review had already delayed by at least 5 years and therefore there was a need to complete the exercise of policy review as a priority while capturing all necessary policy interventions. She reiterated that the orientation of the policy is forward looking and supportive of upcoming technologies and services. The Minister viewed ‘accelerated digitization’ is the ultimate objective of the policy and the policy should smoothly take the sector towards convergence in coming 3-4 years.

The Minister took special interest in Voice over IP and Over the Top (OTT) services and specifically asked the participants to give their views on it.

After this workshop, the stakeholders will still get opportunity to submit their view/comments to the Ministry which will be duly considered.