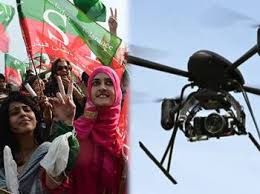 SEVERAL metres ahead of where containers are blocking the main Islamabad expressway, over a bridge on the Kashmir Highway at the Zero-Point interchange, a group of young Pakistan Tehreek-i-Insaaf (PTI) supporters have surrounded a young man.

The man is holding a white metal object above his head. Not more than 1.5 square feet in size, this object has four tiny fans at its corners, two green and as many red lights, and a camera attached with a cable.

This is the drone camera, the latest tool adopted by Pakistan’s ever-growing electronic media to beat each other in the competition of better coverage of the unending cycle of breaking-news events in the country.

As the young man adjusts the camera and then releases it above his head, the crowd — waving the PTI’s red and green flags — cheers. The “drone” takes a round over the heads of the participants in the Azadi March and returns to the hands of its master.

“This machine is very useful for the coverage of events such as marches, public gatherings and mass movements,” says Asad Butt, who operates the copter camera. “It covers aerial footage across 360 degrees up to one kilometre. It has a wire attached with quadrangular fans and a camera and shows everything at the scene which ground cameras are unable to show.”

Butt works for a private company and provides such flying cameras to local and international television channels on demand.

But he refuses to divulge more details because the authorities have recently shown concern over the rapidly increasing use of these drones.

Since the PTI and the Pakistan Awami Tehreek (PAT) long marches started from Lahore on Thursday to demand that the PML-N government step down, half a dozen drone cameras have been flying over the crowds.

“We were stopped from using these machines yesterday to cover the placement of the containers because the authorities have become sensitive about it,” says Nadeem Ihsan, senior manager (technical) of Samaa TV, which says it used the drone camera the first time in Islamabad during the coverage of the PTI’s earlier public gathering at D-Chowk on May 11. The authorities also sought the names of the staff of the channels that are deputed to use and coordinate these cameras in order to regulate this latest media tool.During the past week, private television channels also showed scenes from inside the PAT chief Tahirul Qadri’s secretariat and the PTI’s Zaman Park activities using these flying cameras. That prompted the authorities to impose a ban on the use of these drones without permission, keeping in view the vulnerability of these machines in being used for terrorism and criminal activities.

“Their concerns are valid,” says Ihsan. “This object has the ability to be used for terrorism purposes. There is no doubt that this technology is very useful but the authorities have a right to regulate it. We have applied for the permission from the administration and I think that all others who are using it should also seek a formal approval.”

Satellite engineer Asif Shareef says the technology has become a major tool in competition and people have liked its coverage. “People like variety in the coverage of big events,” he says. According to Ihsan, the price of the copter camera ranges from $200 to $500,000 depending upon the quality of the camera and the other equipment used to prepare one.

But for Shahidur Rehman, director (technical) of Samaa TV, the price takes a backseat when it comes to the quality of the coverage of an event, particularly such large gatherings spread over vast areas where cameramen don’t have the freedom of movement.

“It captures the footage of locations where a cameraman doesn’t have access,” says Rehman. “We can move its lens in the air with a remote. We can show much wider scenes. So the use of such drone cameras has become a compulsion now. We have bought our own drones to meet the coverage demand and use it during all major events in Karachi, Lahore and Islamabad.”

As the drone camera takes another aerial round under the dark clouds now lifting after a heavy downpour minutes ago, the exciting crowds wave at the camera and yell again.

“It is showing our people from all over the venue, it’s great technology and I’m very happy to see it,” says Jehanzeb Khan, a PTI worker who has come from Peshawar.

But the authorities are cautious about the growing numbers of these new drones. “If there were only top five to six major players that were using drone cameras, it would be fine,” says a senior administration official on the condition of anonymity. “But we are concerned that the number of these drones may increase to an unlimited level and that would be alarming. We need to make rules to control this technology.”