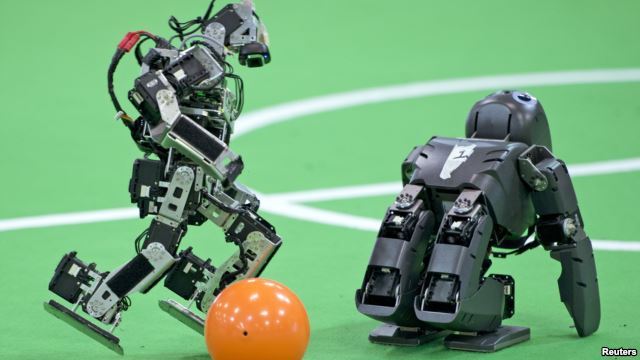 Pakistan Invited to Compete in RoboCup 2014 in Brazil

Pakistan has been invited to participate in RoboCup 2014 — to be played in Brazil on the sidelines of the FIFA World Cup – and the country might send a six-robot team to the event.  Students at Pakistan’s Center for Advanced Studies in Engineering [CASE] built the robots. The center’s Vice Chancellor Shaukat Hameed Khan told media that the purpose of the competition is to develop robo-teams to play against the World Cup champions in the year 2050. VOA reported.

Khan said “our aim is to build robots that are like humans, with legs, with the ability to move, see the ball, dribble it and score goals. These robots should be able to beat the human team by 2050.”

The vice chancellor said each current robot costs about $4,000, and they were paid for by students. He maintained that participation in the RoboCup will be good for football’s future in Pakistan.

While there is excitement about the invitation to Brazil, Khan said due to the lack of funds, the team may not be able to go. He told VOA that the government refused to pay the cost of the trip, and he is now trying to seek help from the private sector.

Noting that Pakistan’s participation in the Street Child World Cup this year had a positive impact, Khan said even if “our national team could not go [to the World Cup], but if our robots go, it will be good for the future of soccer in Pakistan.”

Khan said another positive aspect for Pakistan is that balls made in the Pakistani city of Sialkot will be used in this year’s World Cup.

Pakistani-made balls were banned for nearly a decade due to issues surrounding child labor in Pakistan’s sporting goods manufacturing industry. The ban was lifted after help from programs run in cooperation with the United Nations, the United States and other countries.