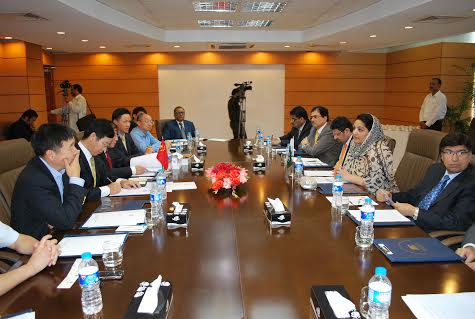 Government wants to make a smartphone accessible to a common man at a low cost and this target can only be achieved if mobile phones are manufactured locally. MoS IT Anusha Rahman said this while talking to a high level chinese delegation comprising of  CEOs and heads of leading telecoms who called on MOS IT Mrs. Anusha Rahman to discuss local mobile manufacturing prospects in Pakistan here in Islamabad today. Chairman BOI Mr. Ismail Mufta, Federal Secretary IT Mr. Akhlaq Ahmad Tarar, Additional Secretary IT Mr. Azmat Ali Ranjha, Chairman NTC Brig ® Waqar Rashid Khan, and Member (Telecom) Mr. Mudassar  Hussain were also present there.

Minister while talking to the delegates said that after 3G/4G spectrum auction, Pakistan has entered in a new era of technological advancement. We have less than 2 percent broadband penetration and after 3G/4G, 98 percent green field is expected to be tapped. We invite potential telecom manufacturing  companies to come forward and invest in teleocm equipment mobile hand sets manufacturing to help in building the eco system in our rapidly thriving telecom market.

Ms. Anusha Rahman further said that Telephone Industries of Pakistan (TIP)  had been making land line phones for PTCL. Present government intends to use the skilled labour and facilities of TIP for local manufacturing of mobile phone. TIP is equipped with advance machines which can be used effectively in local mobile manufacturing. We invite telecom manufacturing companies to partner with Pakistan when embarking on this new era of technological advancements.

Government is ready to facilitate investors by offering tax relaxation and others lucrative incentives in the recent budget Government has reduced taxes of telecom services and also incentivised new manufacturers through reducing coporate taxe by over 10 percent.

Chairman BOI Ismail Mufta while talking to chinese delegation said that telecom sector in Pakistan has huge potential for investment especially after 3G/4G and government has already announced many concessions including 10 years tax holidays to the foreign investors. He said that China mobile is a success story in Pakistan and other chinese companies by learning from their experiences, can invest in local mobile manufacturing confidently as Public Private partnership. Government of Pakistan also has a free trade agreement with china.

Head of the chinese delegation Mr. Lou Peide, Secretary General China Mobile Communication Association (CMCA) appreciated the investment friendly policies of the present government of PML(N) and expressed keen interest in local manufacturing plan. While sharing his experiences he said that china telecom industry had started its journey from zero about 20 years back and now its leading the world with 80 percent mobile manufacturing share. He said that Pakistan is a drastically growing market in telecom sector and its pace would be further geared up with its local manufacturing industry.

Minister of State for IT appreciated the spirit and keen interest shown by the  chinese telecom companies for their investment in local mobile manufacturing in Pakistan and assured them the utmost cooperation of Ministry of IT and Government of Pakistan in this regard.