A meeting of the Spectrum Auction Advisory Committee was held under the chairmanship of Federal Finance Minister, Senator Mohammad Ishaq Dar at the Finance Ministry today. 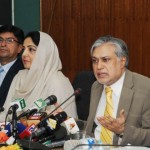 Government of Pakistan has accepted several  demands of telecom companies regarding the upcoming 3G/4G spectrum auction. The auction is now going to be held on 23rd April whereas biddings can be submitted by 14th April.  This decision was taken under Minster Finance, Dr. Ishaq Dar today.   The following demands of the telecom companies also accepted ,

1)      Telecom companies will be paying bank guarantee and price of the spectrum in rupees.

2)      No new licenses will be issued for the next eighteen months after the auction.

3)      The time frame for rolling out 3G/4G operations will be exceeded for which a meeting is going to be held at PTA.

Telecom companies have expressed satisfaction over the actions taken by Government in accepting the demands and solving their grievances.

Chairman PTA Dr. Syed Ismail Shah briefed the Committee on the progress made so far on the auction of 3G/4G licenses. He informed that the new spectrum will provide increased download speed and multiple new applications would be available to the Consumers, and would also generate employment opportunities.

The Finance Minister said that PTA should ensure that best international standards for quality of service were provided to the consumers. He emphasized that the consumers should get state of the art next generation mobile services in line with the international best practices. PTA was also directed by the committee to launch a public awareness campaign.

Finance Minister emphasized that the whole process should be completed with transparency and expressed his satisfaction over the progress. He expressed the hope that PTA would conduct competitive auction for deployment of next generation mobile network. He concluded that with the introduction of new technology the local telecom industry would benefit from transfer of technology and users would have new services and applications through the introduction of mobile broadband.

Later on, CEOs of cellular mobile operators also met the Spectrum Auction Advisory Committee and discussed their suggestions on the draft Information Memorandum. The committee considered their recommendations for inclusion in the final Information Memorandum The CEOs expressed their satisfaction over the auction process and expressed their commitment to provide high quality 3G /4G services to the people of Pakistan.

The auction is scheduled on 23rd April while the sealed bids will be submitted to PTA on 14th April 2014.