Mobile services remained suspended in at least 15 major cities of Pakistan for most of the day on Friday in what the government claimed was a security measure put in place to ensure a peaceful Yaum-e-Ishq-e-Rasool (Love the Prophet (pbuh) Day). Cellular networks were switched off in the early hours of morning and were not resumed till late evening. This action cause to cellular companies  loss 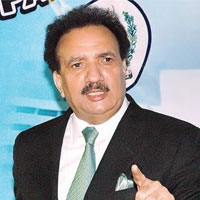 Commenting on the development, Minister for Interior Rehman Malik Friday said the suspension of cellular networks on the eve of Yaum-e-Ishq-e-Rasool had disturbed the nefarious designs of terrorists and the idea had proved successful and was widely applauded.

“If mobile phones are the root cause of the problem, we will surely curb their misuse and soon devise a strategy,” he said while talking to the media during his visit to a police check post to examine the security situation amid protest demonstrations against the anti-Islam film.

Malik said protesters had been asked to gather in F-9 Park or at D-Chowk and not damage public properties.To a question, the minister said he had already sought report on the killing of a private television channel worker during the demonstration in Peshawar and would talk to the prime minister for financial assistance for the victim’s family. He said the police were handling the protesters with an iron hand and no challenging of the government’s writ would be spared.

Malik said till Thursday night, intelligence reports were received of terror incidents in Peshawar amd Quetta and low level information regarding Islamabad also. However, the strategy of suspending cellphone service was applauded even in Karachi where unprecedented peace was witnessed for the very reason that phones were out of order, the minister said.

Malik said pillion riding had also been banned in Islamabad for a day because people on bikes were seen holding batons and petrol bottles trying to torch public properties. “Those who come for peaceful protest never come with batons in hand. Some people were even witnessed opening fire. It looked like they were coming to fight a duel,” Malik commented.

To a question about the arrival in major cities of activists of banned outfits, the interior minister said known faces would be nabbed but at the moment, police couldn’t do anything those who were unfamiliar.

The minister said Rangers had already been deployed and were backing the police, and the army had also been put on alert. “But after yesterday’s (Thursday) action, violent elements should have realised that we meant business. And today (Friday) also, I mean business,” the minister said.He regretted the inconvenience caused by the suspension of cellular services but added that the decision was the need of the hour.