Apple founder Steve Jobs has died on 5 October. Jobs, who recently stepped down as CEO of Apple, had been suffering from pancreatic cancer. In a statement Apple says: “Steve leaves behind a company that only he could have built, and his spirit will forever be the foundation of Apple.” Following Jobs’ resignation as CEO in August, the company named Tim Cook as chief executive.

Steven Paul “Steve” Jobs (February 24, 1955 – October 5, 2011)[5][6][7] was an American computer entrepreneur and inventor. He was co-founder,[8] chairman, and chief executive officer of Apple Inc.[9][10] Jobs also previously served as chief executive of Pixar Animation Studios; he became a member of the board of directors of The Walt Disney Company in 2006, following the acquisition of Pixar by Disney. He was credited in Toy Story (1995) as an executive producer.[11]

In the late 1970s, Jobs, with Apple co-founder Steve Wozniak, Mike Markkula[8] and others designed, developed, and marketed one of the first commercially successful lines of personal computers, the Apple II series. In the early 1980s, Jobs was among the first to see the commercial potential of Xerox PARC’s mouse-driven graphical user interface, which led to the creation of the Macintosh.[12][13] After losing a power struggle with the board of directors in 1985,[14][15] Jobs resigned from Apple and founded NeXT, a computer platformdevelopment company specializing in the higher-education and business markets. Apple’s subsequent 1996 buyout of NeXT brought Jobs back to the company he co-founded, and he served as its CEO from 1997 until 2011.

In 1986, he acquired the computer graphics division of Lucasfilm Ltd which was spun off as Pixar Animation Studios.[16] He remained CEO and majority shareholder at 50.1 percent until its acquisition by The Walt Disney company in 2006.[17] Consequently Jobs became Disney’s largest individual shareholder at 7 percent and a member of Disney’s Board of Directors.[18][19] On August 24, 2011, Jobs announced his resignation from his role as Apple’s CEO. 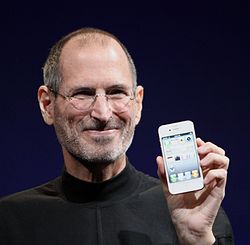 2011-10-06
Previous Post: Zong once again active in the help of flood affective.
Next Post: Use of mobile phones by cops poses security risk