Use of mobile phones by cops poses security risk

By: admin
In: Telecom
With: 111 Comments 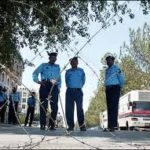 The use of mobile phones by police officials, particularly those deployed inside the Red Zone as well as those on duty at sensitive checkpoints and police pickets at the entry and exit points of the federal capital, has become a serious source of concern.

Even more serious is the situation where police officials deployed at sensitive security checkposts and pickets are frequently seen using their mobile phones instead of focusing on checking of vehicles. The constables sitting behind automatic guns in bunkers have been seen many a time either sleeping or listening to or busy text messaging on their mobile phones.

And far more serious is the use of mobile phones by all ranks inside the Red Zone , deployed at sensitive buildings such as the Parliament House, Supreme Court of Pakistan, Parliament Lodges, Cabinet Division and the Pakistan Secretariat in addition to those deployed at entrance and exit points of the Diplomatic Enclave.

The use of mobile phones by law-enforcers while they are deployed on active duty increases the security risk. And especially when in quite a few incidents of terrorism occurring in the past, members of law enforcement agencies were found collaborating, facilitating or sympathising with terrorists, the use of mobile phones while on duty, especially inside the Red Zone, is indeed a serous security threat.

The police officials on duty inside the Red Zone are well aware of all kinds of VVIP movements and if any single one of them may start conveying this information, which is kept tightly under the wrap, to terrorists by using mobile phones, it can lead to a disaster.

And it should not come as a surprise because there have been many incidents in the past where men in uniform (not only police) or officials of intelligence agencies, have collaborated with terrorists by providing them with accurate information about the timings of the movements of VVIPs.

What immediately required of the high-ups in the police department is that a complete ban should be imposed on the use of private mobile phones while they are deployed at security checkpoints, police pickets or while on traffic control duties.

There should be a complete ban on carrying a mobile phone by police officials during the time of duty when they are deployed inside the Red Zone and they should be communicating only through official communication gadgets, the wireless sets provided to them.

This is certainly going to be a Herculean task to implement these orders because everybody has become so addicted to the use of a mobile phone that without it one starts feeling isolated and cut off from the rest of the world. There would be resentment as well as there would be violations of these orders. But the way things stand right now in connection with the law and order and security situation, the practice of using mobile phones while on duty can lead to some disaster any time.

In the past, similar concern was raised in these columns about the Islamabad Traffic Police using their cell phones while on duty, and that too when they are not using the hands-free kit or are seen busy text messaging from their handsets while they are on duty.

The issue of the ITP (Islamabad Traffic Police) officials using cell phones while busy controlling traffic at times when traffic signals were off, was once raised with the senior officials of the department some time back (about a couple of years ago probably) and at that time a serious notice of the situation was taken and proper orders were issued against the use of cell phones to all the ITP officials while they were supposed to be manually controlling the traffic movement.

The ITP officials were given a special kind of uniform shirts, which had a pouch to carry wireless sets, holding it close to their mouth and ear to make it easy to communicate with their hands free.

But with the passage of time, it appears, that those orders issued against the use of cell phones while on duty have now been widely ignored.

And now seeing Islamabad Police officials deployed inside the Red Zone or at police pickets and checkpoints, strategically established to provide a three or four-tier security cover to the federal capital, using these cell phones for making calls or text messaging, one don t feel comfortable with their capabilities to perform their duties efficiently.

When contacted for their views on the matter of use of mobile phones by police officials deployed within the Red Zone as well as at check points and pickets, Inspector General of Police (Islamabad) Bani-Amin Khan said that they were already contemplating to impose a ban on the use of personal mobile phones by officials deployed at strategic locations and offices during duty hours.

We believe there is no need to carry personal mobile phones while they are deployed on duty in uniform. There is efficient equipment available for quick communication through our (police) own communication network. We are already thinking about a move to collect personal mobile phones from uniformed police officials when they are on duty and return those to them when they get off their shift.

The only thing is that we also have to find a solution to this matter because use of the mobile phone has become so common that it now seems to have become an essential part of one s life to remain in touch with one s near and dear ones all the time. So, we have to see how we can make them feel comfortable to leave their personal mobile phones behind while taking up their duties, the IGP said.

We can establish a centralised desk where officials will be deputed to take only emergency messages from families of police officials deployed within the Red Zone or other strategic locations. And if there is some real emergency, that message could be conveyed to the concerned official through our own communication network and they could be facilitated too, he added.

Some other options are also being pondered upon. We do realise the importance of this issue and we will come up with a good solution to this soon, he said.