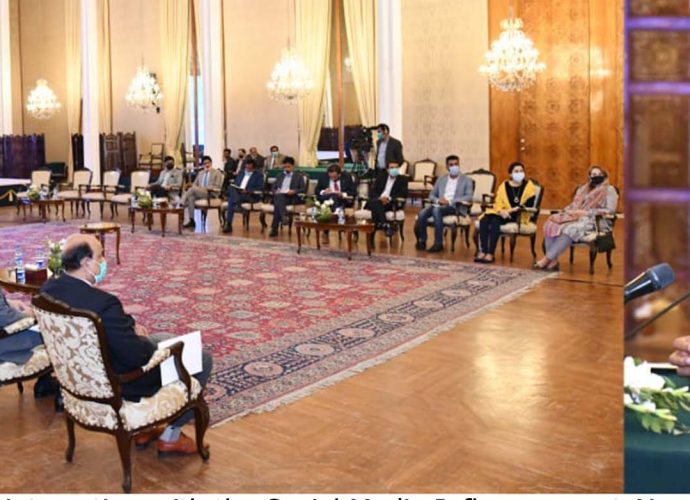 President Dr. Arif Alvi has said that it is not possible to deny the importance of digital media, we need to work together to solve social problems, to protect the common man from the Corona epidemic and to provide economic security under the right government strategy. Comprehensive steps were taken to do so. In a session on digital media in the Presidency, the President said that there should be a collective effort to bring special people into the national mainstream, empower women and promote morality. Inflation  and the fruits of efforts to control unemployment will soon begin to reach the public. The importance of digital media has grown exponentially in the current era, a major milestone in public opinion. He said that many new dimensions of digital media have also emerged While a large number of people are benefiting from it, objections are being raised about its use, including the return of people through counterfeiting and the spread of false news. He said that of the media Balance in power and responsible role is crucial for construction and development. Health and precaution, special people need to work for national mainstreaming, women’s empowerment, social values and ethics. The President said that countries like Pakistan Where resources are scarce, the goal of building a healthy society can be achieved through pre-treatment care and dieting in the health sector, and the Breast Cancer Awareness Campaign is part of that effort. He took precautions and early diagnosis Begum Samina Alvi has led a national awareness campaign that has yielded encouraging results. President Arif Alvi said that Corona was encouraged to vaccinate There is also a need to create complete awareness among the people. He said that social media is also playing an active role in creating awareness about the welfare of special people and their mainstreaming can The President said that empowering women and giving them inherited rights is one of their priorities, our religion teaches us to respect women and pay all their rights, not to achieve the goals of collective development without empowering them. Can be done In response to a question, the President said that due to lack of health facilities in remote and backward areas, tele-health should be arranged in view of the need for treatment and immediate medical advice of women. He said that itThere are areas in which digital media in flowers can play a role. In response to another question, the President said that all the major indicators of the country are showing a positive trend, during Corona the government has adopted the right strategy Comprehensive measures have been taken to protect the common man from the epidemic and provide economic protection, while the effects of measures to control inflation and unemployment will soon begin to reach the public. In response to a question regarding the issuance of the Presidential Ordinance, the President The state said that this is a legal way to carry out matters, if the opposition obstructs the passage of a law in the parliament, then the ordinance is a legal way to prevent the necessary issues from stalling. Past Less ordinances have been issued. On this occasion, the President also highlighted the importance of electoral reform and transparency of the vote. The President said that the present government has highlighted the Kashmir issue and Indian atrocities against the Kashmiri people at every global forum The media will have to play a positive role in awakening the conscience of the world about this. The President said that a positive debate should continue about the effective role of the media so that they can better understand the problems and find a lasting solution. Towards To increase “My dream is for Pakistan to develop rapidly and to use modern technology for this purpose,” he said