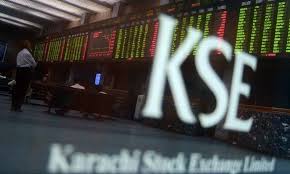 The Pakistan Stock Exchange ( KSE) 100 Index fell by 36.03 points to 44,650.43 points while the share prices of 54.03% companies fell after the stock market continued to fluctuate on Tuesday. As a result, the market’s investment value declined by Rs4.135 billion. However, in terms of share turnover, the trading volume was 7.68% higher than Monday. Trading started on Tuesday in the positive zone and investors continued to be interested in buying shares of profitable companies, which led to a sharp rise and during trading the SE 100 index reached a high of 44830.28 points after profit taking. Due to the trend, the effects of the boom disappeared and the market plunged, causing the index to fall to a low of 44,463 points. Later, the recovery came but the effects of the downturn did not subside and at the end of the trading session, the KSE-100 index lost 36.03 points to close at 44650.43 points. 31266.16 points and KMI 30 Index fell 269.78 points to 72636.28 points. Shares of 409 companies were traded on Tuesday, out of which 221 companies witnessed gains, 179 declined and 9 remained stable. In total, 582,367,875 shares were traded in the market while more than 548,330,000 shares were traded in the market on Monday.