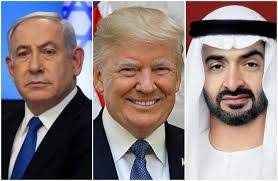 Deal between the U A E and Israel have “far-reaching implications”, Pakistan

Pakistan on Friday said a US-brokered deal between the United Arab Emirates and Israel to fully normalise their diplomatic relations could have “far-reaching implications”, but stressed that its future approach on the issue would be guided by how Palestinians’ rights are upheld.

“We have noted the joint statement announcing agreement of UAE and Israel to have full normalisation of relations. This is a development with far-reaching implications,” a statement issued by Foreign Office spokesperson Zahid Hafeez Chaudhri said, a day after US President Donald Trump broke news of the accord.

The statement said Pakistan has “an abiding commitment to the full realisation of the legitimate rights of the Palestinian people”, including their right to self-determination, while peace and stability in the Middle East are also Islamabad’s key priority.

“For a just, comprehensive and lasting peace, Pakistan has consistently supported a two-state solution in accordance with the relevant UN and OIC resolutions as well as international law,” the press release added.

It emphasised that “Pakistan’s approach will be guided by our evaluation of how Palestinians’ rights and aspirations are upheld and how regional peace, security and stability are preserved” following the signing of the agreement.

On Thursday, Israel and the UAE announced they had agreed to normalise their relations, in only the third such accord Israel has struck with an Arab country.

The deal sees Israel pledge to suspend its planned annexation of Palestinian lands, a concession welcomed by European and some pro-Western Arab governments as a boost for hopes of peace.

But Prime Minister Benjamin Netanyahu stressed Israel was not abandoning its plans to one day annex the Jordan Valley and Jewish settlements across the occupied West Bank.

Announced by Trump via Twitter, the accord raised the prospect of similar deals with other pro-Western Gulf states.

The Palestinian leadership rejected the deal as a “betrayal” of their cause, saying they would withdraw their ambassador from the Emirates.