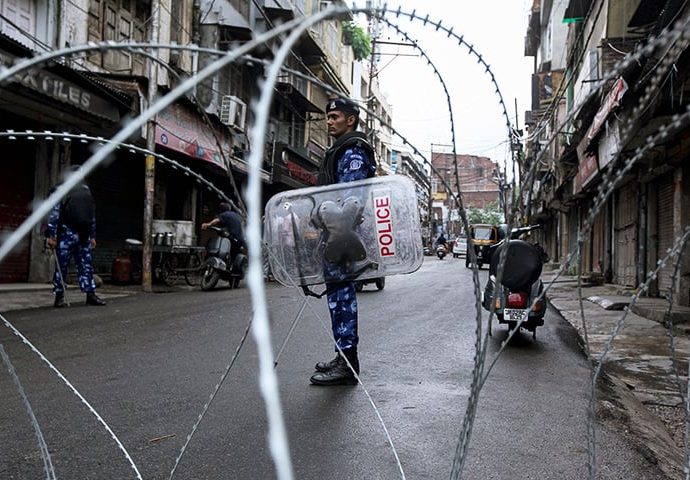 In occupied Kashmir, Eid-ul-Azha turned out to be a highly subdued event and a dull affair as roads wore a deserted look and major mosques and shrines remained closed amidst strict restrictions imposed by the authorities across the length and breadth of the territory.

According to Kashmir Media Service, except for heavily armed Indian troops and police personnel dotting roads, markets, and sensitive installations as well as barricades and concertina wires being placed at many intersections, the Srinagar city and other major towns of the territory were shut for the general masses. Police personnel made announcements early in the morning on public address systems, asking the people not to congregate for Eid prayers. These all unnecessary measures were enforced in the name of preventing the spread of novel coronavirus. However, the actual aim was to punish the people and stop them from offering Eid prayers and holding anti-India demonstrations. Due to these unprecedented curbs, the Kashmiri people, by and large, preferred to offer Eid prayers at home, either individually or in small groups consisting of family members only.

On the other hand, according to the data issued by the Research Section of Kashmir Media Service, today, Indian troops in their continued acts of state terrorism martyred twenty four Kashmiris during the last month of July in occupied Kashmir. During the period, the report pointed out, at least fifty nine persons were injured due to the use of brute force by the troops on general public in the territory. It added that 98 people including top Hurriyat leaders, Muhammad Ashraf Sehrai and Farooq Ahmad Tawheedi and Ameer Hamza were arrested and seven women molested during over 400 cordon and search operations carried out by the troops across the territory. Besides, 11 residential houses and other structures were destroyed and several homes looted in the month.