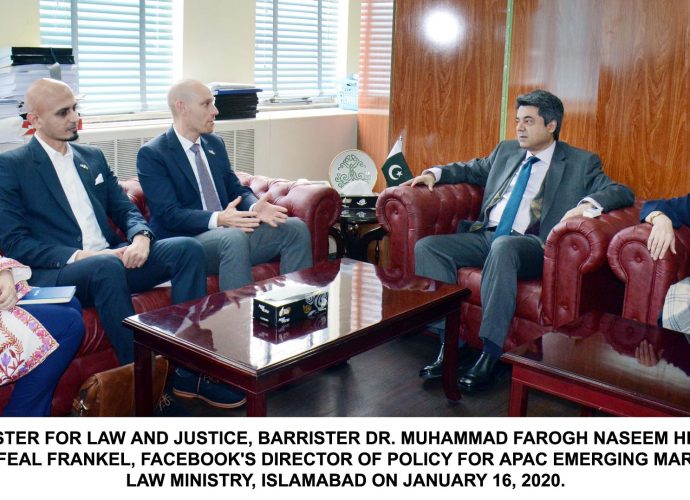 Federal Minister for Law and Justice Barrister Dr. Muhammad Farogh Naseem has said that Facebook is an appropriate and useful medium, through which message on people friendly legislation in Pakistan, can be propagated. He was talking to Facebook Delegation led by Mr. Rafael Frankel, Facebook’s Director of Policy for APAC Emerging Markets, at the Law Ministry on Thursday. Mr. Rafael Frankel told the Minister that Facebook can be a contributor to help Pakistan grow. Facebook is also collaborating with Pakistan to help the users interact safely online. He told the Law Minister, Facebook is working in close coordination with Ministry of Information Technology and Ministry of Education to launch Digital Literacy Drive in Pakistan. In Pakistan 44 million users were reached through Facebook, which helped to boost true or factual information regarding polio vaccination. This helped remove misconceptions pertaining to vaccination as a result of which 40 million people benefited from true information on vaccination. Pakistani users have also been helped by the Blood Donation Apps. Small and Medium Size Enterprises have benefited from Facebook as Facebook provides cheap advertisements. Facebook is also working to boost the number of women entrepreneurs in Pakistan. Barrister Farogh Naseem appreciated the role of Facebook and investments made by social media platform to help the users in Pakistan. He apprised the delegation about laws regarding women property rights and Legal Aid and Justice Authority that are being enacted to specifically help women and children. Parliamnetary Secretary for Law and Justice, Barrister Maleeka Bukhari, who was also present during the meeting, said that Facebook is the most potent medium to create awareness regarding violence against women laws. Mr. Sarim Aziz, Head of Public Policy (Pakistan Facebook) and Sehar Tariq, Public Policy Manager, Facebook were also present during the meeting.

2020-01-16
Previous Post: Jazz maintains its 4G network superiority as per the Quality of Service Survey 2019
Next Post: Revolutionizing the real mobile gaming experience