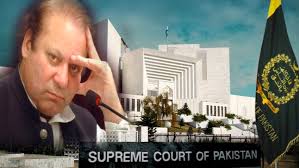 The Supreme Court on Friday disqualified Prime Minister Nawaz Sharif from holding public office in a landmark decision on the Panama Papers case.

Shortly after, the PM House issued a notification saying that Nawaz Sharif, despite having “strong reservations” on the SC’s verdict, has stepped down from his post as the premier. Reacting to the court’s order, a PML-N spokesperson said that the party will utilise all legal and constitutional means to contest the verdict. Dawn reported.

The decision brings Sharif’s third term in power to an unceremonious end, roughly one year before the scheduled general elections which would have seen him become the first Pakistani prime minister to complete a full five-year term. It is unclear at the moment who will be appointed to take over the post till the next general elections, which are scheduled for 2018.

‘Disqualified for being dishonest’

The Supreme Court said the ECP should de-seat the PM for not disclosing his role in the Dubai-based Capital FZE company in his nomination papers, saying that this meant he was not “honest”.

“The Election Commission of Pakistan shall issue a notification disqualifying Mian Muhammad Nawaz Sharif from being a member of the Parliament) with immediate effect, after which he shall cease to be the Prime Minister of Pakistan,” Justice Ejaz Afzal Khan told the packed courtroom.

Justice Khan, who had headed the apex court’s implementation bench following its April 20 order on the Panama Papers case, announced that the larger bench had unanimously deemed PM Sharif unfit for holding office and would also order an accountability court to open references against him and his family.

The judges ruled that he had been dishonest to parliament and the courts, and could not be deemed fit for his office.

The judgement was announced shortly after 12:00pm.

Justice Khan said that the bench had recommended that all material collected by the joint investigation team (JIT) tasked with probing the Sharif family’s financial dealings would be sent to an accountability court within six weeks.

The bench said that on the basis of this information, cases would be opened against Finance Minister Ishaq Dar; MNA Captain Muhammad Safdar; Maryam, Hassan and Hussain Nawaz; as well as the premier.

A judgement on these references should be announced within six months, he said. One judge will oversee the implementation of this order.

The judges “commended and appreciated” the hard work and efforts made by members of the JIT in preparing and filing a comprehensive and detailed report.

“Their tenure of service shall be safeguarded and protected and no adverse action of any nature including transfer and posting shall be taken against them without informing the monitoring Judge of this Court nominated by the Honourable Chief Justice of Pakistan,” reads the court order.

Finance minister to be disqualified

Finance Minister Ishaq Dar and Captain Safdar, who is an MNA, were also declared unfit for office.

ECP has been directed to de-seat Dar for “possessing assets and funds beyond his known sources of income”.

From Friday morning, all eyes were on Courtroom No. 1 of the Supreme Court in Islamabad, where a five-judge bench was set to announce the much-awaited verdict on the Panama Papers case at 11:30am. The proceedings started around half an hour later.

According to media reports, the courtroom was filled to capacity as prominent politicians, lawyers and journalists crowded the room to hear the judges decide Prime Minister Nawaz Sharif’s fate.

The twin cities of Islamabad and Rawalpindi had been on high alert in anticipation of the SC verdict.

The Red Zone had also been partially sealed and people were only being allowed inside after undergoing identification and strict security checks.

2017-07-28
Previous Post: Jovago.pk, Pakistan’s portel has collaborated with Telemart
Next Post: FFC announces half yearly results for the year 2017