Social networking websites can be more addictive than cigarettes and alcohol and can have an overall negative effect on young people’s mental health, says a new report.

The study conducted by Royal Society for Public Health in the UK surveyed almost 1,500 young people aged 14 to 24 on how social media platforms can impact health and wellbeing in issues such as anxiety, depression, self-identity and body image.

The research found that 91% of 16-24 year olds use the internet for social networking which has been described as more addictive than cigarettes and alcohol. The increased use of social media may have also led to higher rates of anxiety and depression in young people which have risen by 70% in the past 25 years.

The Status of Mind report found that most social media platforms have an overall negative effect on teenager’s wellbeing with YouTube being the only exception. The video streaming website was found to have the most positive impact, while major social media website such as Instagram, Snapchat, Facebook and Twitter all demonstrated negative effects. 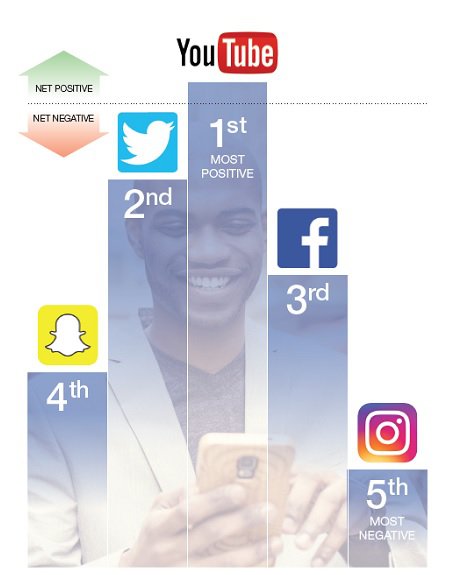 “Instagram easily makes girls and women feel as if their bodies aren’t good enough as people add filters and edit their pictures in order for them to look ‘perfect’,” an anonymous female respondent said in the report.

In addition to this, the research suggests that heavy users of social media who spend more than two hours per day on social networking sites are more likely to report poor mental health. The study finds that unrealistic expectations set by social media may leave young people with feelings of self-consciousness, low self-esteem and the pursuit of perfectionism which can manifest as anxiety disorders.

Using social media on phones, laptops and tablets at night before bed is also linked with poor quality sleep. The research found that one in five young people said they wake up during the night to check messages on social media, leading them to feel constantly tired at school.

Researchers at Royal Society for Public Health have also suggested certain steps to curtail some negative effects of excess use of social media sites. These include the introduction of a pop-up heavy usage warning on websites. “A pop-up warning would give young people access to this information so they can make informed decisions about their own health.”

In addition to this, social media platforms are recommended to identify users who could be suffering from mental health problems by their posts and other data, and discreetly signpost to support. “We would like to see technology used to identify those young people who could be suffering from mental health conditions on social media, and provide them with discreet information about where they can find help and advice should they wish to receive it,” the report further states.