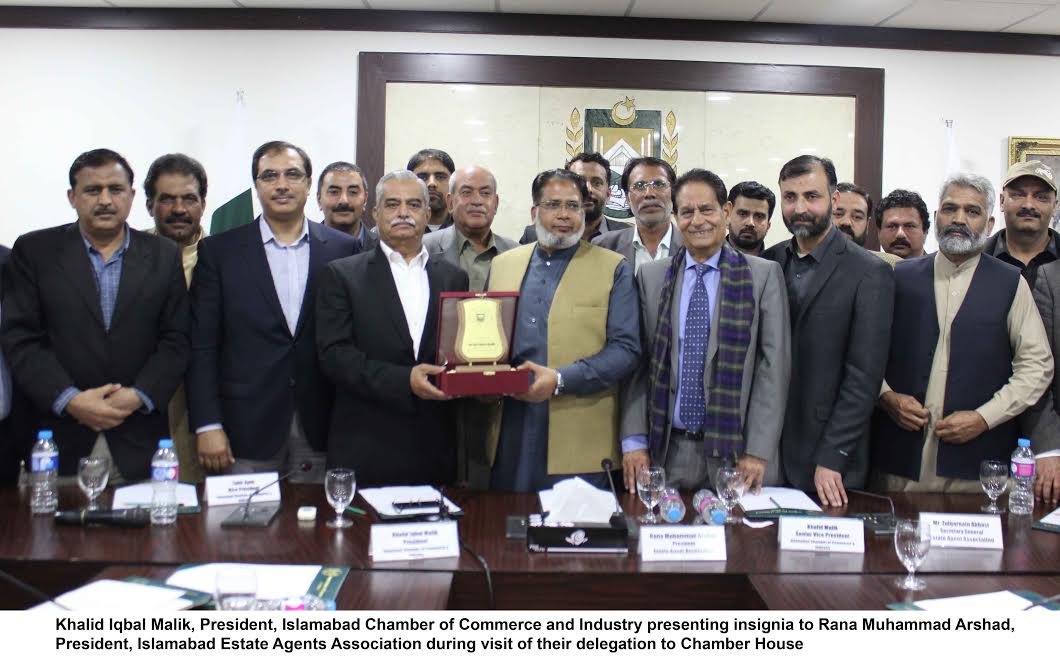 Khalid Iqbal Malik, President, Islamabad Chamber of Commerce and Industry said that real estate sector was playing an important role in the economic development of the country, but was facing problems due to imposition of new taxes. He called upon the government to look into the issues of realtors to facilitate the growth of this important sector. He was addressing a delegation of Islamabad Estate Agents Association (IEAA) that visited ICCI led by its President Rana Muhammad Arshad. Group Chairman Abid Khan, Senior Vice President Fakhar uz Zaman, Vice President Uzair Baloch, General Secretary Zulqarnain Abbasi and executive committee members of IEAA were also in the delegation.

Khalid Iqbal Malik said that business of thousands of people was associated with real estate sector but steps like imposition of new taxes and new method of property valuation have put this sector into slump. He said due to this situation, many investors were leaving real estate sector and cautioned that if government did not address its issues on urgent basis, unemployment would further grow in the country. Khalid Malik Senior Vice President and Tahir Ayub Vice President ICCI assured the IEAA delegation that Chamber would raise their issues at all relevant forums and would play its role for redress of their problems.

Speaking at the occasion, Rana Muhammad Arshad, President, Islamabad Estate Agents Association highlighted various issues being faced by real estate sector business community. He stressed that 2% CVT should be received on the property price determined by FBR and not on covered areas basis. He demanded that CDA, Federal Government Employees Housing Society, Registrar Office and societies should receive CVT, advance tax and gain tax on property price determined by FBR and not on old price written in files. He emphasized that tax concessions should be given to tax filers and tax on bank cash transactions of filers should be eliminated.

He said after payment of CVT and advance tax, if a plot or property was not transferred to new buyer due to any reason, FBR should immediately refund such paid tax and make its tax refund process easier. He urged that FBR should develop tax forms in Urdu so that taxpayers could fill them easily. He said role of middlemen in taxation system should also be eliminated.

Anjuman-e-Tijaran President Ajmal Baloch, Abid Khan Group Chairman, Fakhar uz Zaman Senior Vice President, Uzair Baloch Vice President, Zulqarnain Abbasi Secretary General of IEAA, Khalid Chaudhry, Ashfaq Chatha and others also spoke at the occasion. They said G-13, G-14 and some other sectors were started long time ago, but were not developed as yet and called upon the CDA and FECHS to focus on early development of old sectors to ease the problems of allottees.