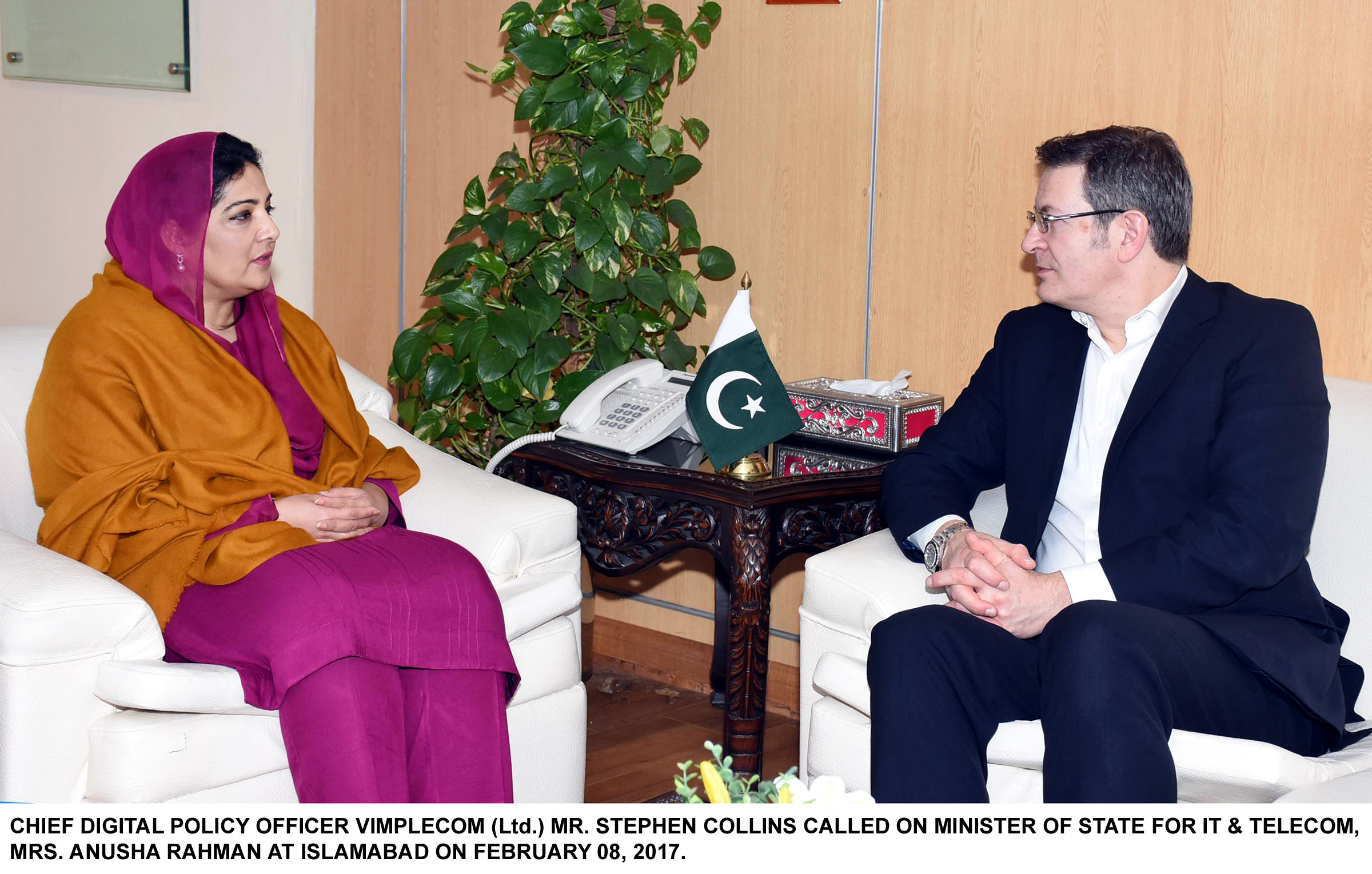 The world has witnessed a phenomenal growth in Pakistan’s IT & telecom Sector. Anusha Rehman

Minister for IT & Telecom Mr. Anusha Rehman has said that the world has witnessed a phenomenal growth in Pakistan’s IT & telecom Sector during last three years because the government has accorded highest priority to the development of ICTs.  Moreover, this tech-revolution was not possible without the meaningful contribution of the private sector for the realization of our vision of “Digital Pakistan. The Minister expressed these views during her meeting with Mr. Stephen Collins Chief digital policy officer VimpelCom who called on the Minister here in Islamabad today.

The Minister apprised the delegation regarding different key initiatives of the government and the ministry which have been taken for sectoral development in recent past.  The Minister said that our main focus is to provide an independent ICT platform to our youth which is almost 60% of our total population so that we could nurture them as entrepreneurs. Therefore, we have established first national incubation centre as a public private partnership model and seven more such centers are in the offing. Through these incubation centers we well be able to develop a cluster of entrepreneurs, who would become an asset, not only for the sector but also for the country.  We are devising a special training module for the training of e-lancers so that our young generation could earn their livelihood by using latest technical skills Minister added.

Anusha Rehman further said that we are rigorously pursuing the agenda of “Digital Pakistan” and spreading e-highways even in remotest and far flung rural areas of the country, in order to ensure ubiquitous developments ICT throughout the country which will not only culminate the “digital divide” but also help them to enjoy basic e-services without any discrimination. She said that our broadband penetration, which was has less then three percent, has swollen up to around 27% within last three years.The number of telecom subscribers are crossing 130 million, which is another encouraging sign.  Therefore, we believe that “Digital Pakistan” would not be a dream anymore.

Mr. Stephen Collins Chief digital policy officer VimpelCom appreciated the Minister and the government for successfully pursuing multiple initiatives for development of ICTs in the country.  Therefore, Jazz (VimpleCom subsidiary) has expended its network and operations in Pakistan and partnering with GoP in public private mode for realization of government’s digitalization agenda.  He also thanked and reiterated his company’s commitment towards facilitating the people of Pakistan with modern ICT solutions and offered to continue to work in this regard proactively.