Pakistani youth are resilient when it comes to cyber bullying, Survey

Telenor Group’s Multi-market Asia online survey reveals while online bullying and risks are still concerns, Asia’s parents feel that youth are increasingly resilientand responsible. The findings were released by the global telecom giant on the ‘Safer Internet Day 2017’ as part of its efforts to make internet safer for youth as it aims for a large-scale digital inclusion.

The survey approached parents and adults across Asia to get their opinion on digital bullying affecting youth and how they deal with it. The survey was conducted over Facebook with 320 respondents primarily from Pakistan, Bangladesh, India, Malaysia, Myanmar, Singapore, Thailand and other Asian countries. While cyberbullying exists across all countries, the respondents said that they are discussing cyberbullying with youth and feel that resilience is being built, which may help them tackle digital abuse or better empathize with victims. The survey targeted Facebook users from 18-64 with stated interests in parenting, family issues, child welfare and online security.

On the question of whether or not parents talk to their children about cyberbullyingand using the internet responsibly, a majority of the respondents (46%) say that they speak to their children ‘all the time’ about internet and online behavior, followed by 39% who discussed this ‘sometimes,’ while 12% said they had never spoken about this topic. When asked about the most common form of cyberbullying children had experienced, ‘Being the target of hostile and rude comments and profanity online’ turned out to be the leading response with 22.5% of respondents; other respondents said they either ‘did not know’ if their children faced cyberbullying, or had not experienced it at all as they are ‘trained how to respond and defend themselves’ against this type of activity.

On the question of  how cyberbullying experiences affected the child, the multi-layered answers imply that Asia’s children are increasingly learning how to deal with bullying online, or actively were able to ignore the attacks with no effect on themas they developed a responsible and cautious online behavior. When asked what must be done to keep children safe online, respondents said that the youth should know which websites or social networks are safe or unsafe, must not share personal information online, and must understand that people post anonymously online without fear of repercussions.

Internet Safety has been an integral part of Telenor Pakistan’s digital inclusion efforts and the company has many initiatives to its credit when it comes to enabling access to safe internet for all its users, especially the youth. Some remarkable efforts in this regard include ‘Safe Internet and School Outreach Program’ where over 15,000 students and 88 elementary school teachers in Punjab, Sindh and Khyber Pakhtunkhwa (KPK) were educated about the safe use of internet; and the recent launch of ‘Safe Internet Guide’ in multiple languages that guides parents on how to talk to children about using the internet for fun and learning while avoiding all forms of cyber bullying.

“Being Pakistan’s foremost digital lifestyle partner and favorite youth telecom brand, we have always aimed for safer internet for our country’s youth,” said Areej Khan, Director Corporate Communication & Responsibility, Telenor Pakistan. “The rightly timed findings of the survey on this ‘Safer Internet Day’ somewhat satisfy us that our youth are increasingly becoming smarter online and are learning how to defend themselves against all forms of cyber bullying. We will continue our efforts to promote a responsible online behavior among children and make the online world safer for our younger generations,” she added.

While online scams and social media platforms in an increasingly digital world appear to be more prolific than ever, it was interesting to note that respondents said their child, or a child they knew, was least likely to experience email and social media account hacking, as well as sharing NSFW (Not Safe for Work) photos or videos. 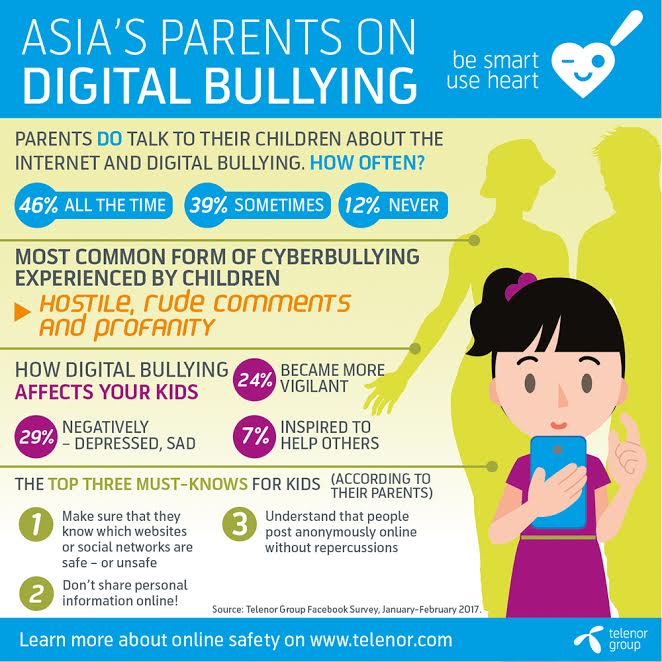