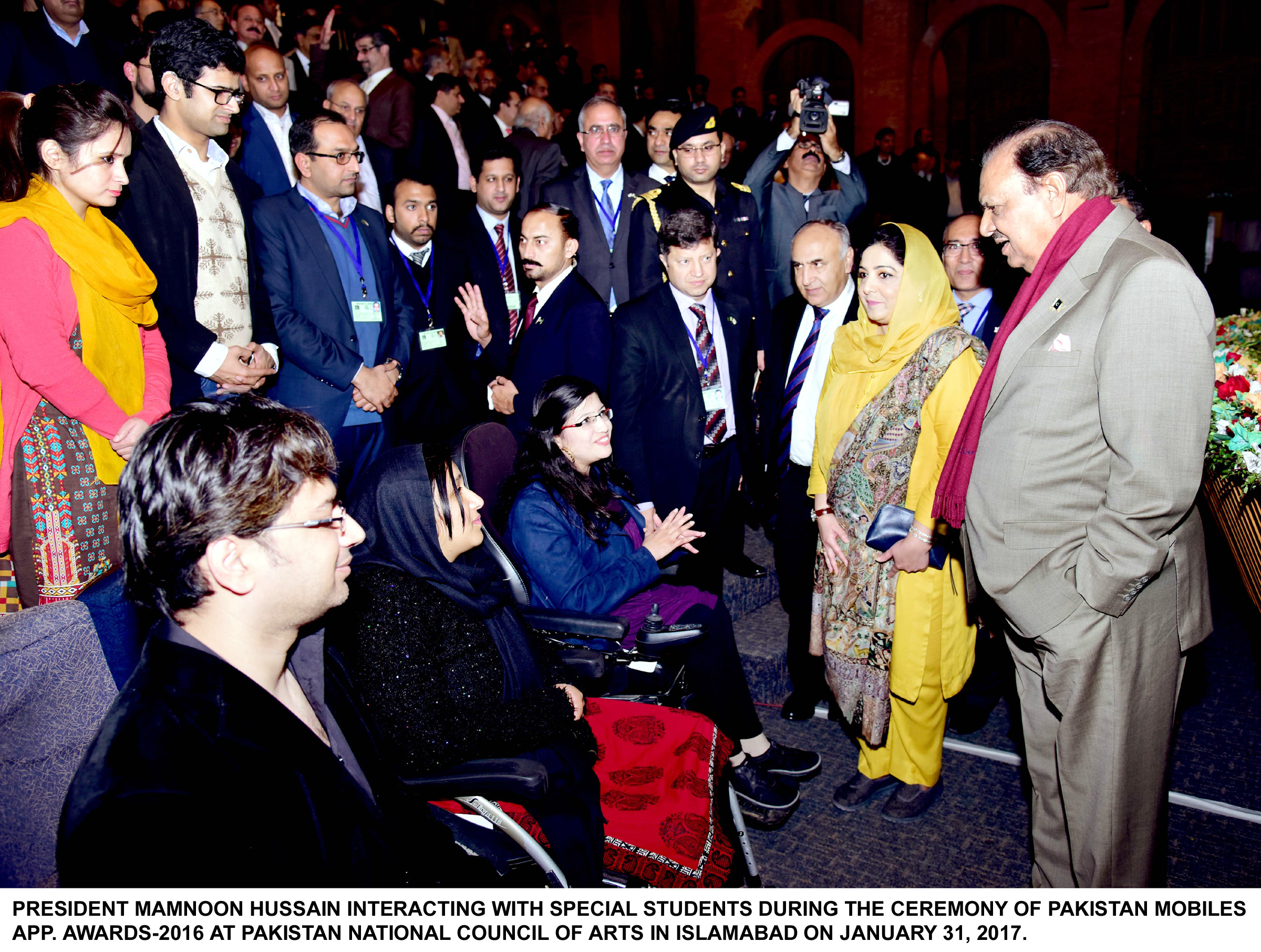 President Mamnoon Hussain on Tuesday said that focus on Information Technology for the stability of the national economy was need of the hour to inform the young generation about modern learning and research trends.

The President stated this while speaking at Pakistan Mobile App Awards 2016 ceremony for persons with disability here at Pakistan National Council of the Arts. The ceremony was organised by IT ministry.

The president said the government took many initiatives for development of information technology in Pakistan, adding that funds have been provided for initiation of different projects regarding 3G and broadband services which were benefiting distant areas of the country.

These steps, he said, would be helpful for the overall growth of the sector and would facilitate the common man.

Similarly, he said delivering laptops and providing scholarships was a crucial step towards equipping our youth with modern education.

The president said the government and IT ministry were utilising all resources to provide best facilities to the disabled persons, adding that disabled persons were part of society and serving them was our moral responsibility.

The president said these mobile applications had been prepared by the IT experts which could provide relief to the people with disability of speaking, hearing, seeing and other problems in their lives.

The President said that 15 percent of the world population consists of those people who were considered as disabled persons.

The president said Pakistan was a land of talented people but this talent was not being used in a proper way.

Minister of State for Information Technology Anusha Rahman said mobile application award would go a long way in developing a strong relationship between the academia, industry and the relevant government organisations and would turn out to be exemplary for the rest of the sectors of our economy.

These mobile applications, she said would enable special persons to live close to a normal people with the help of mobile phones and would enable them to work and communicate with other people for daily affairs.

The minister said that seven IT schools were being set up for girls in rural areas of the federal capital.

Later, the president presented awards to the winners of the competition.

The awards were given with cash prize of Rs 300,000 to the 1st position holder Dr Abdul Ghafar and his team for developing the app Smart Devices.

Chairman PTA Dr Syed Ismail Shah said that Pakistan was already an exemplary model of regulatory and commercial success in the ICT arena.

The introduction of mobile broadband services has also opened new arrays of ICT innovation, digital content delivery, entertainment and economic opportunities for the people of Pakistan, he added.