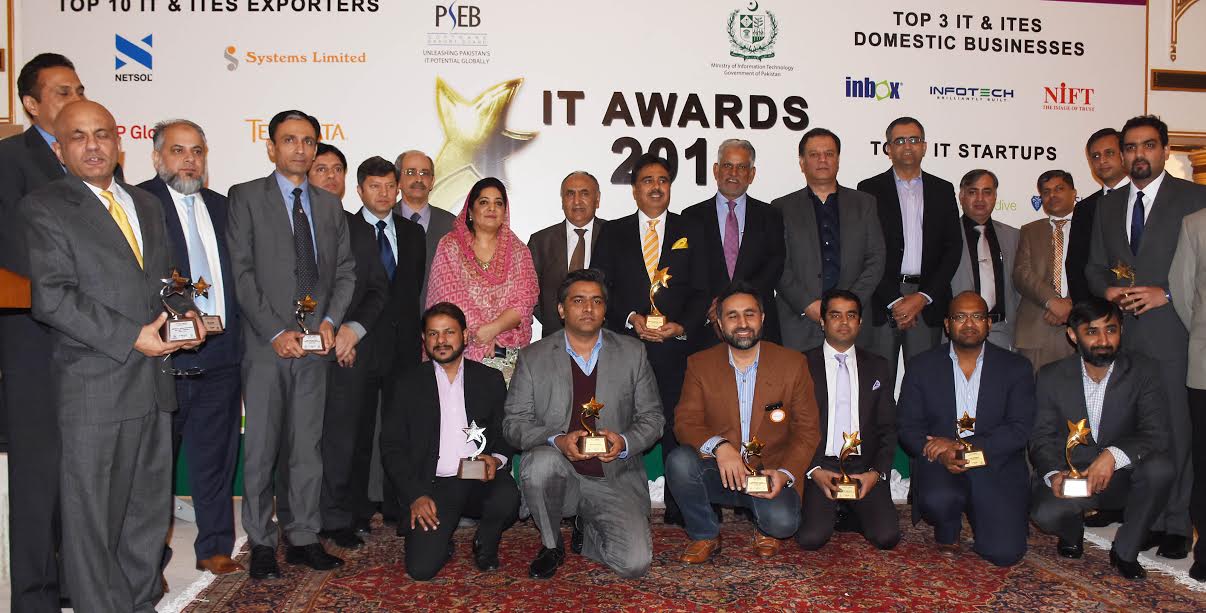 Pakistan Software Export Board (PSEB) under the auspices of Ministry of IT organized an IT Awards event here in Islamabad. The purpose of the event was to motivate and to recognize the top IT exporters of Pakistan. The event was attended by many executives of IT companies, government officials, and dignitaries from different embassies. MD PSEB in his inaugural speech, welcomed the participants and thanked Minister of IT & Telecom Mrs. Anusha Rehman for her generous support and visionary leadership which reinvigorated the whole sector. Therefore, IT sector of Pakistan is being recognized now everywhere domestically and globally. He further said that PSEB has initiated different industry support programs including research studies, software parks and bandwidth, participation in international events, CMMI and ISO certifications, and internships and trainings programs.

The top IT exporters including Mr. Salim Ghauri from Netsol, Mr. Naseer Akhtar from Infotech, and Mr. Haroon Kanth from Teradata Pakistan shared the success stories of their companies with the audience.

Speaking on the occasion, the Chief Guest Minister of IT stated that ICT is a high priority sector for PML(N) government. The ministry had announced the telecom policy in early 2016 and likewise IT policy is in the offing. It was because of the efforts of Ministry of IT that tax exemption on IT exports has been extended for another 3 years. She stressed upon the Industry to reciprocate and collaborate with the government to achieve all set targets especially in arena of remittances, foreign direct investment and employment generation. Anusha Rehman said that IT remittances have shown phenomenal growth under the current government over the past three years. She emphasized that to improve the exports picture, IT companies should report their remittances under the correct IT codes defined by State Bank. She further said that currently our IT export volume is around $2.7 billion and we are targeting $ 5 billion by 2020. The Minister mentioned that she had approached Korea Eximbank in 2014 to start feasibility study for a new technology park on PSEB’s land in Islamabad. Feasibility study has been completed and PC-1 has been approved by ECNEC today. She mentioned that we will establish two more IT parks in Karachi and Lahore subsequently.

Anusha Rehman said that we are pursuing Prime Minister’s vision of Digital Pakistan in true letter and spirit. Therefore, we are focusing on infrastructure development to connect the unconnected especially in un-served and underserved areas. Therefore, we have rolled out projects of worth 20 billion for this purpose and we are quite confident that by 2018 underserved and unserved areas of Pakistan will be connected with telecom services. The Minister said that Pakistan is blessed with huge human resource potential and now we have to train our young lot to make them successful entrepreneurs. We have established a National Incubation Center at Islamabad which is ready for inauguration in first week of January and subsequently more such incubation centers will be established in all provincial capitals of the country very soon, Minister added.

She said that we are establishing 150 state of the art computer labs at women empowerment centre of Baitul Mall and girls of poor strata are being trained in coding and computing in partnership with Microsoft. Moreover, 107 rural girl’s schools in Islamabad Capital Territory are also being equipped with state of the art Computer Labs and computer training.

Minister IT congratulated all of the award winners and hoped that the awards will motivate other IT companies to improve their exports and reporting to get a chance for winning the awards next year.