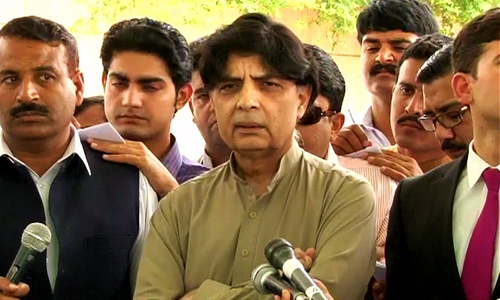 Indicating that an inquiry against Axact over its alleged involvement in the business of bogus degrees may take weeks, if not months, Interior Minister Chaudhry Nisar Ali Khan has asked The New York Times not to draw any conclusions before the inquiry was completed.

Talking to reporters on Wednesday, he criticised the allegations levelled by the NYT. In an editorial published on Wednesday, the newspaper stated that it was not possible for Axact to run the business without the consent of the state of Pakistan.

He promised a transparent, open and comprehensive inquiry into the charges and advised the NYT not to pronounce judgment prematurely. He also asked the domestic media to avoid creating hype and labelling someone a culprit before the probe found evidence of wrongdoing, because it could affect the outcome of the investigation.

He said that the chief executive officer of Axact and other relevant people would be questioned and notices had already been issued to the company.

He also dispelled a perception that Axact’s Chief Executive Officer Shoaib A. Sheikh’s name had been placed on the exit control list (ECL), saying that a procedure for placing somebody’s name on the list had been laid down and the procedure would be followed in all cases.

The minister admitted that he had refused a visa to Declan Walsh, the erstwhile NYT bureau chief in Pakistan who wrote the story on Axact. Mr Walsh had to leave the country after his visa was not extended, just before the 2013 general elections.

Chaudhry Nisar said he had ordered a probe soon after the report about Axact published in NYT made headlines in Pakistan. He said the report raised a sensitive issue, which threatened the dignity of the country.

He said as many as 42 servers, which were taken into custody by an FIA raiding team, had already been sent for forensic analysis, adding that this process could take around a month. He also said that the services of foreign forensic experts could also be utilised, if required.

He said the FIA had also asked the Federal Board of Revenue (FBR) to check the firm’s accounts and examine its tax returns to see if there was some wrongdoing there. The Securities and Exchange Commission of Pakistan (SECP) had also been asked to see if the firm was a duly registered entity and who its owner was and who were on its 10-member board of directors.

The Interior Minister said that Axact’s offices in Karachi and Islamabad had been sealed but rejected reports of arrests, saying that certain employees had been called in for questioning. He said a seven-member investigating committee had been formed. It included officers from different wings of FIA, including the corporate crimes and cyber crime wings.

The FIA has also urged all Pakistani citizens who have received academic degrees through Axact to contact its directors in Karachi or Islamabad.

Director FIA Islamabad Inam Ghani told Dawn that the FIA had brought in 17 more computers from the Axact offices in Islamabad, as well as visitor and caller logs.

Separately on Wednesday, the SECP also issued a show-cause notice to Axact under Section 496 read with Section 476 of the Companies Ordinance, 1984, asking the company to explain their “ultra vires activities which are not authorised by its memorandum of association”.

In a statement, the commission said that the stated objectives of the company were to “carry on business of import and export of software and related matters”.

The same statement also mentions another notice issued to the company, calling for information in terms of Section 261 of the same ordinance.

The notice has been issued to Axact (Pvt) Ltd and all its associated companies “in order to gather further information”.