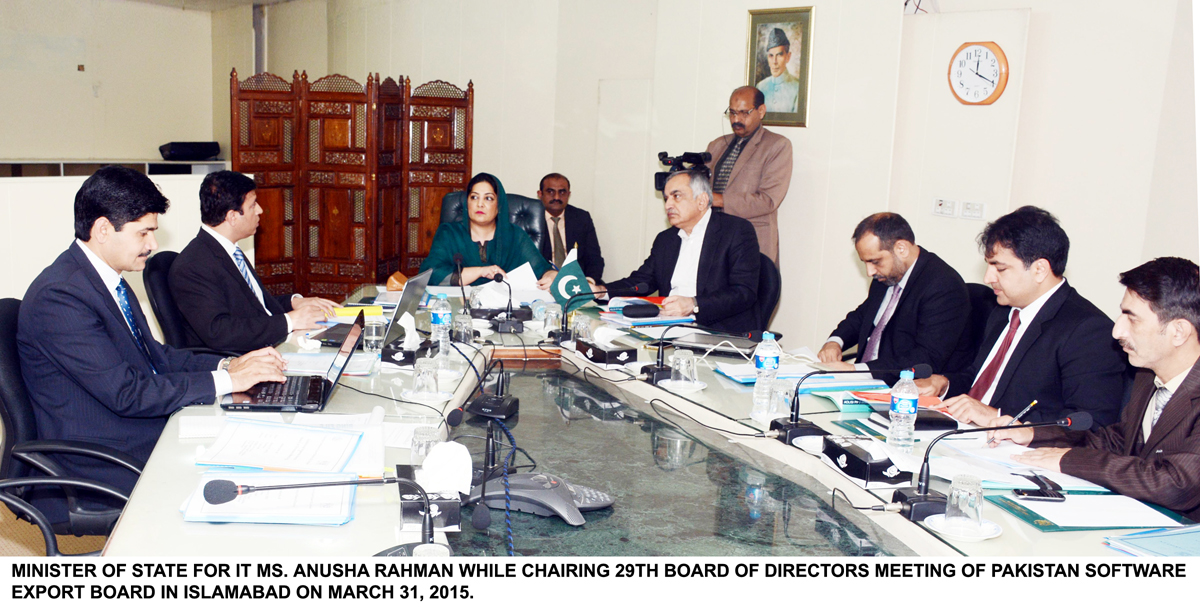 By: admin
In: Technology
Tagged: 35%, Companies, IT Exports, PSEB

Minister of State for IT, Ms. Anusha Rahman, chaired the 29th meeting of the Board of Directors of Pakistan Software Export Board (PSEB) to assess the state of the IT industry of Pakistan and to evaluate the steps being taken to bolster long term growth of the IT Industry, to boost IT exports, and to attract investment for the IT Sector. All members of the Board of Directors attended the meeting including Secretary IT and MD PSEB. Private sector was represented by CEO Netsol and Chairman [email protected]

The Minister stated that Ministry of IT has already declared the current year as “the Year of IT”. Hence, PSEB should focus on capacity building of IT companies and international marketing of IT products to further strengthen Pakistan’s IT sector. She said that capacity enhancement of IT the sector though public private partnership will certainly enhance the volume of IT exports. Initiation of CMMI certification program of PSEB will go a long way in improving the quality of IT companies and their products and services.

MD PSEB, Mr. Asim Shahryar Husain, apprised the board regarding recent achievements of PSEB starting with a 35% growth in IT exports over last year with a forecast of $500 million in IT remittances for 2014-15. He reported that the number of software houses and call centers registered with PSEB has increased by 12% during the first 8 months of 2014-15. He mentioned that PSEB had setup a Pakistan Pavilion for the first time in the history of Mobile World Congress 2015 in Barcelona where mobile apps companies of Pakistan demonstrated their expertise in design and development of mobile apps and games. Around 110 leads were generated from the event with an expected business value of $1 million. He also mentioned that a Saudi group is exploring the option of acquiring different IT companies of Pakistan and then taking them public through IPOs. PSEB is their strategic partner and roadshows will be organized in Islamabad, Lahore, and Karachi in end of April for this purpose.

Minister of State for IT, Ms. Anusha Rahman, directed PSEB to explore new incubation projects on the pattern of Google’s TechCity, etc. which could be financed through SAARC Development Fund. The Minister further directed MD PSEB to concentrate on the CMMI certification project and that PSEB may train 5-6 auditors initially and then these auditors will audit and certify maturity level of IT companies with exports potential of $1 million a year or more.

The minister applauded PSEB’s efforts for reducing bandwidth tariffs by 35% for IT companies and hence reducing their cost of operations. The Minister directed PSEB that every project proposal must be submitted with clear timelines so that its progress and results could be monitored on a regular basis in order to get optimum results. She asked PSEB to focus on capacity enhancement of IT companies and directed PSEB to explore ways and means to help starts ups and young entrepreneurs. She further directed PSEB to launch capacity enhancement programs for IT companies which could prove to be instrumental in boosting IT exports of Pakistan.