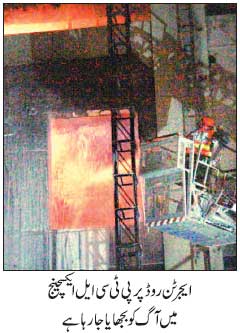 A portion of the Egerton Road exchange of Pakistan Telecommunication Company Limited (PTCL) which was gutted some four months ago, again caught fire on Wednesday.

The fire this time destroyed some gas cylinders placed at the fourth floor of the under-construction portion of the building that was gutted on Sept 28 last year.

Rescue 1122 extinguished the fire in an hour or so. Last year the blaze had damaged PTCL equipment and machinery, disrupting telephone and internet services in Lahore, Faisalabad and Multan for several days.

A PTCL official told Dawn that the flames did not cause any harm to the equipment at the exchange which had temporarily been installed at the parking lot.

A rescuer said no firefighting equipment was found on any floor of the exchange.

“I was a member of the team that had controlled last year’s blaze at the same place. Our seniors had recommended to the PTCL authorities to get firefighting gadgets installed at every floor of the exchange. It seems no lesson was learnt from the last fire,” regretted the official who wished not to be named.

Complaints about disruption in telephone and internet services started pouring in different exchanges of the PTCL late in the night.