By: admin
In: Telecom
Tagged: broke out, Fire, Lahore, PTCL

A fire broke out at the office of the Pakistan  Telecommunications Company due to which the landline and internet services were affected across the city. Fire teams extinguished the fire partially. More than 45000 landline  and 25000 internet connection suspended.
The blaze erupted again this morning due to which the telephone, internet and Emergency 15 services across the city were suspended.
Fire brigades from all over the city were called to douse the inferno.
DCO Lahore said that the fire was caused due to a short circuit as per the initial investigation, however, the cause of the fire will be clear after the investigation.

Rescue officers are busy extinguishing the fire which – according to unofficial estimates – has caused losses worth millions of rupees.
The fire erupted on one of the floors of the building located on the city’s Egerton Road at around midnight and later engulfed other floors and nearby buildings.
Firemen had managed to put out the fire last night, however, it started again Monday  morning.

PTCL officials said that it will take three to four days to restore services across the city.
All helplines including Rescue 1122, Edhi and state call centers are down because of the fire. 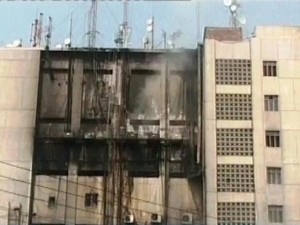