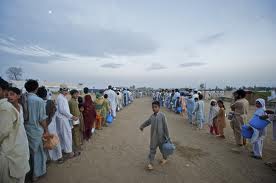 PTCL CEO Waleed Arshiad has offered 10 million rupees for internally displaced people (IDPs) to Punjab Chief Minister Main Shahbaz Sharif. It is interesting that the head of PTCL has decided to give this huge sum of money to a chief minister of a province and not to a national level entity. Though this is a remarkable gesture by PTCL, the history of the telecom giant tells a different story. Many in Telecom Industry suspect that this may be an attempt by PTCL CEO to gain influence and support from Shahbaz Sharif whose party, PMLN is in power. It is noted by many that this hasn’t been the first time when PTCL has tried to gain influence through charity as it has done this with the previous PPP led government as well.