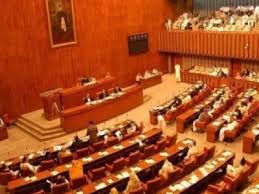 The Senate standing committee on cabinet secretariat on Thursday took up the two-year-old alleged Rs47 billion tax evasion by telecom companies saying the actual amount may have doubled and required adjudication.

In July 2012, the National Accountability Bureau (NAB) had served notices on five telecom operators to clear their pending tax dues that amounted to Rs47 billion. Dawn reported on Friday.

While the telecom operators insisted that they did not evade taxes, the bureau believed that the companies were charging consumer sales tax and withholding it instead of depositing the money with the government. However, there has been no outcome of the NAB investigation so far.

Although the subject was not on the agenda of the Senate committee which met to discuss the 3G auction held last month, the question was nonetheless raised by Senator Rubina Khalid. She believed that the telecom operators charged consumers billions of rupees in the sales tax and withheld it.

“Are telecom companies depositing the sales tax in the government kitty after charging the consumers?” Senator Rubina asked the Pakistan Telecommunication Authority (PTA).

However, PTA Member Finance Tariq Sultan informed the participants of the meeting that the telecom companies charged their subscribers 19.5 per cent general sales tax (GST), 15 per cent withholding tax and seven per cent service charges.

“According to our knowledge, the telecom operators deposit these amounts with the government otherwise they would have to pay penalties under the FBR rules. However, it is not the PTA mandate to collect taxes from the operators,” he added.

Though the PTA tried to explain that collecting taxes was the task of the FBR, Senators Mohammad Humayun Khan Mandokhel and Kamil Ali Agha believed it was criminal and carelessness that the regulator did no not keep a check on the issue.

“We will assist the regulator in anyway possible to ensure that the telecom operators paid the government taxes even if it required amendments to the PTA rules,” said Senator Mandokhel.

But the PTA has been urging the government to lower the taxes being charged from the telecom operators to increase sales and generate more returns.

The members urged the chair of the committee, Senator Kalsoom Parveen, to invite the FBR and the PTA to the next meeting so that they can explain how the taxes collected from the consumers were being utilised.

“This was also the time from February to October that the regulatory body was without its head and members,” added Mr Shah, explaining one of the reasons why SIM verification process was not fully completed. The process involved taking down background information of the purchaser of SIM such as mother’s name and the place of birth.

However, he told the meeting that a biometric system had been launched in Karachi and Quetta.

“The system will be introduced in other cities by July 31, 2014, to make sure a SIM is verified when sold. The system has not been introduced anywhere in the world,” said Mr Shah, explaining how 23 million SIMs had been blocked since 2008.

He told the committee that in collaboration with security agencies certain conditions were being introduced to ensure a strict SIM verification process.

“We are making sure that only five SIMs are registered against one identity card. The authority will also ensure that the PTA-approved models of handsets are sold in the markets by registering international mobile equipment identity (IMEI) numbers of all imported mobile phones,” he added.

The members requested the PTA to restrict the Afghan registered SIMs at Pakistan Afghanistan border like it was done at the border with India.

But the PTA chairman explained how this was a policy decision and outside the scope of the regulator.