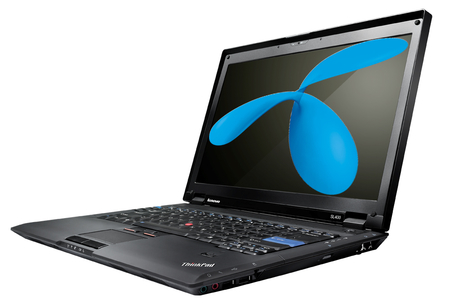 KARACHI ( MEDIA )
Telenor Pakistan, which acquired a licence for third-generation (3G) mobile internet services in the April-23 spectrum auction, is likely to launch its high-speed mobile broadband services in two weeks.
“We have already completed our network swap [upgrade] and all of our 8,000 cell sites are 3G-ready,” the company’s Chief Marketing Officer Irfan Wahab Khan told a group of journalists in its Karachi office on Tuesday. The Express Tribune reported on Wedensday.
Though Khan did not give a specific date for the launch of its 3G service, he gave all the indications that the company is ready to launch the much-awaited mobile broadband service anytime which, according to our sources, will be functional within two weeks.
The Oslo-based cellular service giant and the second largest telecom operator by subscribers (35 million) is testing its 3G services on a trial basis in selected areas, according to Khan. The company has already paid 50% fee for acquiring 5 megahertz band in 2100 MHz or 3G spectrum to Pakistan Telecommunication Authority, meeting the final prerequisite for launching 3G services in the country.
“Telenor users could dial a code [*7799#] to find out whether the service is available in their area,” Khan said. The company’s marketing head also said they would ensure the affordability of the service for low-income subscribers.
Besides monthly plans, Khan said the company would also offer daily and weekly passes [data bundles] to keep 3G within the reach of low-end customers.
In his presentation laden with statistics on the benefits of mobile broadband, Khan said 10% increase [in subscribers] from 2G to 3G could cause a growth of 0.15 percentage points in the country’s GDP – an equal increase in mobile broadband penetration could boost the economy by 1.3%, he said.
While country’s telecom sector has taken a giant leap forward in the world of technology, Khan insists this is not without the challenges facing the industry.
The country’s smartphone penetration is about 10%, which is a challenge and so is low mobile internet penetration, which also stands at the same level, Khan said.
Giving a breakdown of taxes on telecom, he said there is an activation tax of Rs250 on every new connection issued by the industry, which is borne by the service provider. Additionally, he said there is a 19.5% federal excise duty on telecom industry, which is relatively higher than other sectors of the economy and another 15% withholding tax.

2014-04-30
Previous Post: Four telecos will get 3G/4G licenses by 10th May.
Next Post: Samsung Electronic fall in quarterly profit