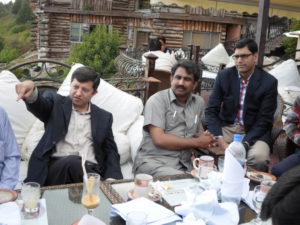 Chairman Pakistan Telecom Authority Dr Syed Ismail Shah ensured that entire process 3G/4G spectrum auction from hiring the consultants to auction design and implementation is transparent, efficient and according to the very best international practices. To this end, PTA has held detailed consultations with all stakeholders during the entire process to ensure that everyone is onboard for this important event. He was givining detail breefing about coming 3G/4G spectrum auction to senior journalists on Saturday.
Chairman PTA said that convergence of internet and mobile telephony has created a rich brew of content and services that benefits more people, in more places than ever before. Due to the unavailability of 3G/4G services in Pakistan till now, consumers have been deprived of these offerings. To bring individuals, information and mobile broadband services closer together quickly and conveniently, Pakistan Telecommunication Authority (PTA) is in the process of auctioning spectrum for Next Generation Mobile Services (NGMS).

He said that the process was initiated when the Government of Pakistan issued a policy directive on Spectrum Auction for Next Generation Mobile Services.
PTA started the process for hiring reputed international consultants to design and manage the auction process. After meeting all the procedural requirements and PPRA Rules, ‘Value Partners Management Consulting Limited’ was selected on 23rd November 2013 from among five shortlisted 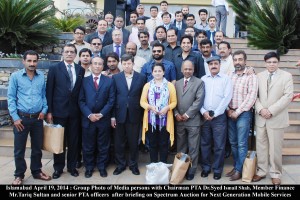 applicants. The contract with the consultants was signed on 19th December 2013. PTA has ensured that entire process from hiring the consultants to auction design and implementation is transparent, efficient and according to the very best international practices. To this end, PTA has held detailed consultations with all stakeholders during the entire process to ensure that everyone is onboard for this important event.

About spectrum auction he told that PTA published the final Information Memorandum, developed together with Value Partners, on 17th March 2014. A total of 50 MHz is being offered as part of the auction, where 30 MHz has been offered in the 2100 band and 20 MHz has been offered in the 1800 band. The auction is designed in two stages a) The Sealed Bid Stage for demand exploration b) The final auction on April 23rd , provided demand received is greater than supply.
Based on the received sealed bid on 14th April 2014, it is now clear that received demand is greater than supply.

Therefore, the final auction will be conducted on 23rd April 2014 as planned. For the auction, PTA has chosen the Simultaneous Multiple Round Ascending (SMRA) Auction mechanism. SMRA is the most preferred auctioning mechanism and is widely used in modern day auctions worldwide. It is also preferred over the traditional open cry out auctioning model as SMRA allows both auctioneer and bidder flexibility to simultaneously bid on lots of their choice, privacy and time to make educated decisions during the auction. Some of the recent auctions conducted in United States, Sweden, Norway, Hong Kong and Canada were all SMRA based auctions. 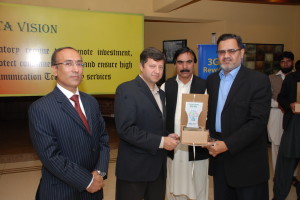 Some salient features of the auction were that each bidder must show interest in a minimum of 10 MHz and a maximum of 15 MHz in the 2100 band. In order to be eligible for 10 MHz in the 1800 band, a bidder must win at least 10 MHz in the 2100. Exact lot configurations are being designed with maximization of over all benefit in mind. The base price for 10 MHz in 2100 is $295 Million and 10 MHz in 1800 is $210 Million. These prices were calculated after extensive market assessment and spectrum valuation by the PTA consultant, Value Partners. A successful bidder must pay either 100% upfront or 50% of the winning bid amount within 30 days and remaining 50% with markup @ Libor + 3% will be paid in equal annual installments over a period of 5 years. Licenses to successful bidders will be issued for a period of 15 years.

Dr Ismail Shah is very much optimist that Spectrum auction to make mobile broadband services available to consumers is a landmark event in the history of Pakistan’s telecom sector. Pakistan’s telecom industry is several years behind the rest of the world where 3G networks have already matured and operators are in the process of launching 4G networks since 2010. Offering spectrum in different bands allows the Government to maximize revenue (The combined base price value of 50MHz spectrum brings greater than $1 Billion investment into the Pakistani economy)
Offering both the 2100 and 1800 bands allows telecom operators flexibility to deploy both 3G and 4G networks and offer the most advanced mobile services to their customers. For the consumer, availability of high speed mobile broadband services in both urban and rural areas will encourage a more 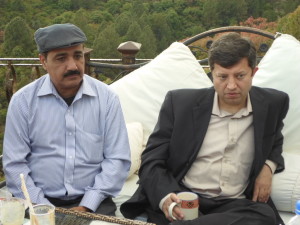 connected community and promote e-commerce related activities. It is hoped that next generation mobile services will be an enabler towards GDP growth, introduce more innovative e-services such as E-medicine and E-education to facilitate population in rural and remote areas of Pakistan as well. The deployment of 4G technologies will also provide our Engineers and technicians to acquire the latest skills and thus become competitive in the international market. The successful auction of this spectrum is expected to create 900,000 + jobs in the Telecom sector and will have multiple benefits for the economy of Pakistan.

Chairman PTA has ensured a transparent and fair process. It has hired a reputed international consultancy firm, Value Partners, to assist PTA in the entire auction process and the auction mechanism was designed based on best international practices and in accordance with the PPRA rules and regulations