Zong and six other will get LL Licenses

Pakistan Telecom Authority has announced that it will issue new Local Loop licenses under the Deregulation Policy 2003. It must be stated here that those that have already applied for Local Loop licenses shouldn’t worry since their application is being processed. PTA will also consider fresh applications for any new company by visiting PTA’s website. 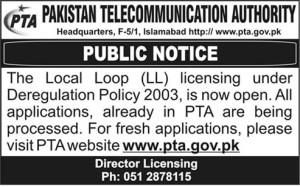