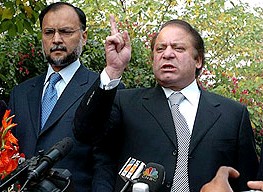 Telecoalert has learnt through reliable sources that Ms. Anusha Rahman, Minister of State for Information Technology & Telecom has stopped struggling to get her brother accommodated in PTCL somewhere in its legal department as advisor or consultant.

A well placed expert in telecom sector while commenting on this development said, “This may be the repercussion of her previous decision that was turned down by PM”.

Let us recall here for our readers that on March 23/25, this year, telecoalert.com revealed that Ms Rehman, just prior to auction of much-awaited 3G, has got her husband accommodated in the BoD of Ufone. This news circulated in telecom areas quite rapidly which was then carried by TV and print media. PM Mian Muhammad Nawaz Sharif while taking the notice of this appointment immediately asked for resignation.

According to different well placed sources it has been suggested that Mr Ahsan Iqbal is being considered to be full Minister and Mrs. Anusha Rehman will remain as Minister of State with limited powers. However Minister Finance, Ishaq Dar has recommended that this should be delayed till the 3G/4G auction since it will give out wrong impression. This suggestion has been accepted and for the time being the matter has been curtailed.

“She must have been very careful in all her future endeavors”, the expert added.