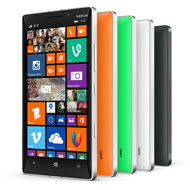 Today at Microsoft’s Build 2014, Nokia announced three Lumia smartphones based on Windows Phone 8.1 and a series of exclusive Nokia features. Nokia confirmed that Windows Phone 8.1 is scheduled to be available across the entire Lumia Windows Phone 8 portfolio as an over-the-air update this summer following testing and partner approvals.

– The Nokia Lumia 930 is a flagship smartphone which delivers the best of Microsoft and Lumia for the ultimate video and imaging experience.
– The Nokia Lumia 635 and Nokia Lumia 630 offer an uncompromised Windows Phone 8.1 experience and bring Microsoft and Lumia innovations to more affordable prices.
– The Nokia Lumia 630 comes in two variants and introduces more choice as the first Lumia with dual-SIM, targeted for growth markets like China and India.
– New devices introduce ‘SensorCore’, which provides innovative low-power motion sensing with Bing Health and Fitness – SensorCore SDK also being piloted with select partners ahead of public release.
– Imaging SDK 1.2 BETA is an updated Nokia Lumia SDK that will enable developers to build the next generation of imaging and social apps.
– The entire Lumia range with Windows Phone 8 will get an over-the-air update called Lumia Cyan, which will combine Windows Phone 8.1 and unique Lumia features into one update package.
– Windows Phone 8.1 introduces exciting new features – including more details at glance with LiveTiles, fast Word Flow keyboard and Action Center that help people get closer to things they love.

“Today we are introducing people to the best of Lumia and the best of Microsoft through three stunning devices based on Windows Phone 8.1. In addition to the new developments from Microsoft, Nokia is delivering people an uncompromised imaging experience, great design and better business phones,” said Stephen Elop, executive vice president of Nokia’s Devices & Services. “We’re also pleased to bring the great developments in Windows Phone 8.1 to the Lumia devices people love today.”

People get closer to everything they love with Windows Phone 8.1 on Lumia

Accompanying the Windows Phone 8.1 over-the-air update will be new unique experiences for Lumia that further enhance Nokia’s leadership in imaging. This includes enhancements to the camera roll and Creative Studio, as well as an improved Nokia Storyteller app, for sharing stories as a video slideshow on social networks.

New Lumia smartphones integrate the best of Microsoft and Lumia 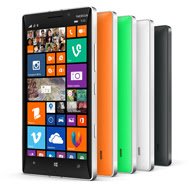 The Nokia Lumia 930 is the flagship embodiment of Windows Phone 8.1, and features:
– A 20 megapixel PureView camera with ZEISS optics and advanced Rich Recording, delivering a flawless video and imaging experience with new Living Images innovation.
– A stunning design combining elegant metal and vibrant polycarbonate with a 5-inch ClearBlack screen for unmatched viewing of Vyclone, Netflix and Xbox Video, even in bright daylight.
– A Powerful 2.2GHz Snapdragon quad-core processor delivering more from content like apps, games, the Internet and integrated Microsoft services like OneDrive and Microsoft Office.

The Nokia Lumia 930 is expected to roll out globally in June starting with Europe, Asia, Middle East and India, available from USD 599 before taxes and subsidies. 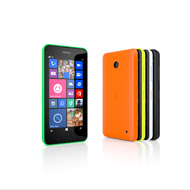 The Nokia Lumia 630 and Nokia Lumia 635 provide an uncompromised Windows Phone 8.1 experience at an affordable price, and deliver:
– A Snapdragon quad core processor providing a faster social experience with Word Flow and social apps like WhatsApp and WeChat.
– A unique colorful design with changeable shells and 4.5″ ClearBlack screen delivering a great entertainment experience with apps and games including Asphalt 8 and Vimeo.
– More choice with three variants, including the Lumia 630 in 3G single SIM and the first Lumia with 3G Dual SIM; plus the speedy Lumia 635 in 4G/LTE. 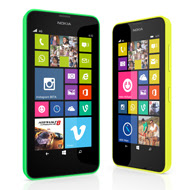 – The same experiences as high-end Lumia smartphones including SensorCore with Bing Health and Fitness, Microsoft Office, Nokia Camera, free Nokia MixRadio streaming, and free Global maps and navigation from HERE, which save time and money.

The Nokia Lumia 630 is expected to roll out in May, beginning with Asia, India/Middle East, South America and Europe, at USD 159 for the single-sim variant, and USD 169 for the dual-sim variant before taxes and subsidies. The Nokia Lumia 635 is expected to be broadly available, including in the US starting in this summer, from USD 189 before taxes and subsidies.