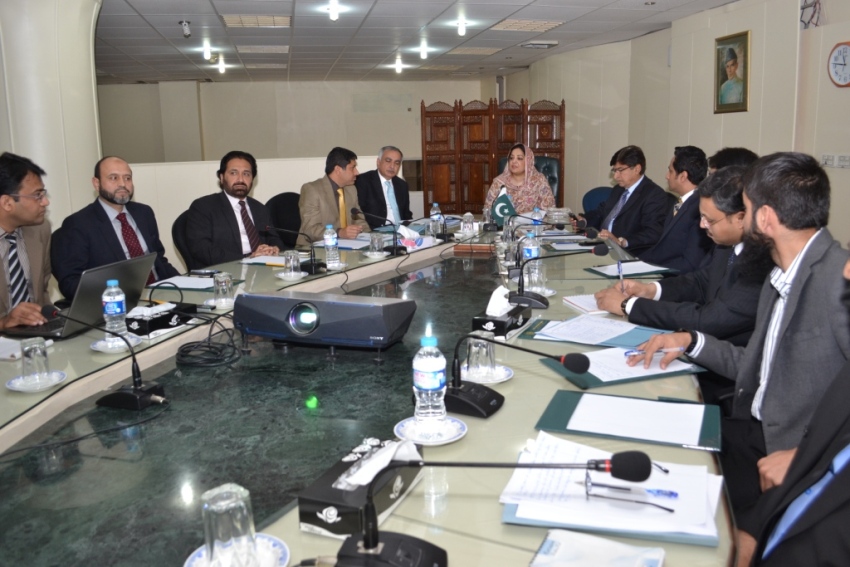 E-Government ’ 75% of the Federal Ministries/Divisions are now connected

A progress review meeting to roll-out e-office suite at All Federal Ministries/Divisions was held under the chairmanship of Ms. Anusha Rahman, Minister of State for IT.  The meeting was also attended by Mr. Akhlaq Ahmad Tarar, Secretary IT, Mr. Azmat Ali Ranjha, Additional Secretary (IT) and senior officials of the MoIT, PCB, PTCL, NTC and M/s LMKT.

Historically the PSDP IT project titled “E-office Replication” was approved on 30th April, 2007, and the said application was developed and implemented at Ministry of Information Technology (MoIT) under a pilot PSDP project. However, the pilot project could not be completed in time, the present government has given utmost priority to the ICT Sector particularly e-government system and the Ministry is emphatically pursing the e-office suite implementation in the Federal Government.

The Minister shared the importance of the flagship e-government application named “E-office Suite” with the participants.She appreciated the efforts of the relevant stakeholders on the deployment of single instance e-office software on data centre to serve all the Federal Ministries/Divisions and advised to ensure its proper quality assurance. The Minister further expressed that it is a key tool to ensure efficiency, accuracy, effectiveness and good governance, transparency and accountability in decision making and delivery of efficient and cost-effective public service to citizens of Pakistan. The E-office Suite consists of six modules including e-filing module. The main purpose of the e-filing module is to promote less paper/digital Government.

The Minister enlightened that the government, as part of its vision, is utilizing indigenous technological industry for development and implementing an e-office system to maximize usage of local IT human resource. The e-office system is already functional in Prime Minister Office, National Assembly Secretariat and Ministry of Information Technology. She further explained that following pre-implementation steps have been taken to ensure efficient roll-out in all Federal Ministries/Divisions with in timeline:

II.   Survey of all Ministries to collect data regarding Human resource roles and responsibilities, status of IT infrastructure and workflows of all the Federal Ministries/Divisions for the configuration of e-Office Application is completed.

III.   The nominations of focal persons from 30 ministries have been received, and specialized training for orientation on e-Office is being imparted to focal persons of all Federal Ministries/Division for successful change management, which is key to success of e-government.

The Minister stated that MoIT is conducting workshops to give orientations regarding e-office, end of March, to the heads of Federal Ministries/Divisions and their attached departments/organizations will be invited to familiarize them with the good practices and measures which have already been taken by MoIT.

Furthermore, the Minister directed to the management of PCB to complete all the requisites formalities of e-office suite so that it could be roll-out within stipulated time period positively.