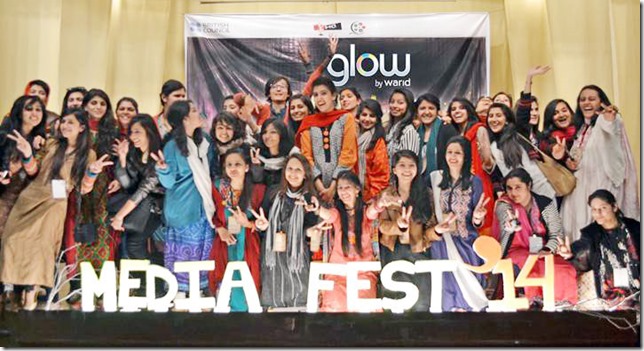 Pakistan’s most loved youth brand, Glow by Warid continues supporting the young leaders. The latest initiative carried out was the Kinnaird’s Media Fest 2014. It is the third fest in a row which is presented by Glow.

With 22 institute’s participation in it, the Fest was aimed at helping media students unleash their talent and expose their inner journalistic skills.

Being the most active and happening brand, Glow has always strived to provide a platform to Pakistan’s youth through which they can express their talent.

The festival was organized by the Kinnaird’s Media Studies Department with the support of the Kinnaird Media Club. The event, featuring inter-collegiate competitions, was aimed to showcase the talents of the twenty-two participating institutes across Punjab.

The Fest’14 was one of a kind with a variety of competitions ranging from Television Ad-Making Competition to the Movie Dubbing contest that guaranteed thirty minutes of pure entertainment. While some competitions were all about creativity and an immense display of talent; others like the Report Writing Competition tested the participants’ writing skills. The Short Film Competition was to be a morale boost for young, amateur film makers for whom having their work displayed on a mass scale could prove to be a huge stepping stone in the right direction. Poster Designing and Photography Competition were the two stand-outs from amongst the rest with the beautifully captured shots and unique graphical designs. The six competitions were well-structured and brilliantly coordinated, so much so that no hitch was observed on the day of the event.

Teams from Punjab University, Government College, Lahore Grammar School and other educational institutions participated in the event. The Photography competition was won by the team from Services Institute of Medical Sciences while University of Lahore bagged the first position in the Poster competition. The Television Ad Making competition was won by Beaconhouse Defense Campus.

Collectively outstanding efforts were made by each participant and students genuinely put their hearts in all what they presented in these competitions, especially highlighting the social issues of the society.

Glow by Warid always recognizes the potential and provides platform and means to the youngsters to come forward of our nation to show their talents. The KMS President appreciated the role of Glow for supporting them in conducting their third Media Fest successfully.

16.     University of Management and Technology (UMT)

21.     University of Engineering and Technology  (UET)

22.     University College of Medicine and Dentistry