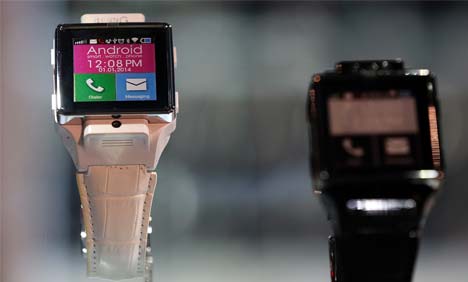 Samsung unveiled two new computerized wristwatches on Sunday, this time including health sensors and related fitness features to give people a reason to buy one.

Samsung’s first Galaxy Gear smartwatch came out last fall amid much fanfare, but it landed with a thud in the marketplace. Samsung and its smartwatch rivals had failed to persuade many consumers that they need to be able to constantly check messages from their wrists. Wearable devices that succeeded tended to be fitness products such as the Fitbit.

The new Gear 2 and Gear 2 Neo will have a heart rate sensor, a pedometer and various tools to measure exercise, sleep and stress levels. The low-resolution, 2-megapixel camera on the Gear 2 is being moved to the main body; it was on the strap on the original Gear. It’s not immediately clear if the Gear 2 Neo has a camera.

It’s also unclear whether the new watches will continually display the time. In the original Gear, that was shut off to save battery, which lasted just a day. The new watches promise two or three days under normal use, putting them more in line with what rivals offer.

Samsung didn’t immediately reveal prices for the new watches, but said they would be available in April.

Samsung Electronics Co. announced the new watches Sunday ahead of the Mobile World Congress wireless show in Barcelona, Spain. Samsung has a major event Monday evening, during which it is expected to announce a successor to its popular Galaxy S4 smartphone.

The company decided to make the latest smartwatches with a little-known operating system called Tizen OS, instead of the Android system from Google used in the original Gear, as the South Korean electronics company tries to break the dominance Google has on mobile devices.

The move gives some credence to a fledging system that Samsung and other backers want to see on all sorts of devices, including televisions, refrigerators and cars. Samsung already has a Tizen camera out, but a Tizen phone has yet to emerge, despite expectations of one last year. For now, Samsung is putting Tizen on a smartwatch instead.

Although Google gives away Android for any manufacturer to use in its gadgets, it’s loaded with a range of Google services, including stores for apps, music and video. Samsung is trying to promote its own stores as well and ends up confusing users by including two of everything.

To prevent Google from having a similar dominance in wearable devices and other gadgets beyond phones and tablets, Samsung is pushing Tizen OS as an alternative.

But before Tizen can take off, Samsung needs the new Gear to be a success.

The original Gear worked with selected Samsung phones to display email and text alerts. It also had a camera on the strap for low-resolution photos and a speakerphone on the watch to make calls, Dick Tracy-style. The Gear’s 1.6-inch screen keeps the watch small enough – at least for men – to work as a fashion accessory. Straps came in six colors.

The device had many shortcomings, however.

Its $300 price tag was 50 percent higher than what Sony Corp. charges for its SmartWatch 2. And the Gear worked only with selected Samsung phones, while watches from Sony and Qualcomm Inc. work with a greater pool of Android devices from a variety of manufacturers.

In addition, app selection on the Gear was limited, while the apps that were available fell short on functionality. Although the Gear was supposed to offer quick access to information so you don’t have to constantly pull out your phone, many of the alerts simply tell you to return to the phone to read a new message.