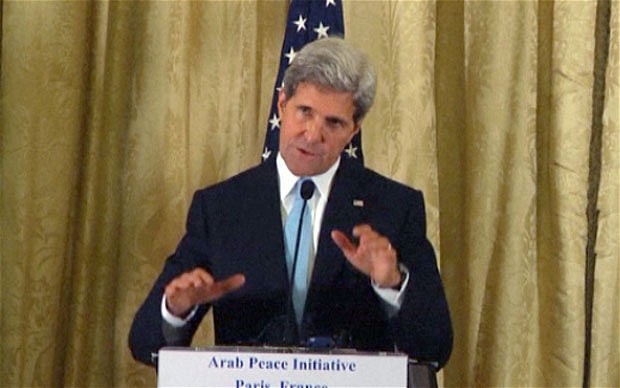 John Kerry admits US spying has ‘reached too far’

Washington DC (MEDIA)
John Kerry, the US secretary of state, has admitted that some of America’s spying activities have “reached too far”.
He said many of the surveillance practices were carried out “on automatic pilot, because the technology is there and the ability is there.”
Speaking to a conference in London via viedolink, Mr Kerry promised that a review of National Security Agency surveillance work would result in some spying activities being halted altogether.
“The president and I have learned of some things that have been happening in many ways on an automatic pilot, because the technology is there and the ability is there,” he said.
“I assure you, innocent people are not being abused in this process, but there’s an effort to try to gather information, but in some cases, some of these actions have reached too far and we are going to try to make sure it doesn’t happen in the future.”
Mr Kerry added that what Washington was trying to do was, in a “random way,” find ways of determining if there were threats that needed responding to.
He also lashed out at some of the reporting about alleged spying, sparked by leaks from fugitive former NSA contractor Edward Snowden, wanted by Washington on espionage charges.
“Just the other day… there was news in the papers of 70 million people being listened to. No, they weren’t. It didn’t happen,” he said.
“There’s an enormous amount of exaggeration in this reporting from some reporters out there.”
US intelligence chiefs have said these reports are based on a misinterpretation of an NSA slide leaked to the media by Snowden.
Mr Kerry is due to embark on a tour of Europe and the Middle East aimed at repairing the damage caused by reports that the US eavesdropped on on its allies, including monitoring the cell phone of Germany’s chancellor, Angela Merkel.
His comments came as China demanded the United States provide an explanation over its spying programme amid reports that Washington’s missions in Beijing, Shanghai and elsewhere in the country were involved.
The Sydney Morning Herald newspaper, amplifying an earlier report by the German magazine Der Spiegel, said that a top-secret map leaked by fugitive intelligence analyst Edward Snowden showed 90 US surveillance facilities at embassies and consulates.
The facilities in East Asia were focused on China, with centres in the US embassy in Beijing and US consulates in the commercial hub Shanghai and Chengdu, the capital of the southwestern province of Sichuan, it said.
Hua Chunying, spokeswoman for China’s Ministry of Foreign Affairs, said that Beijing had “severe concerns” about the reports.
“We require the US to make a clarification and give an explanation,” she told reporters at a regular briefing.
“We require friendly diplomatic missions and personnel in China to strictly abide by international treaties… and do not engage in any activity that… may jeopardise China’s security and interests.”
Australian embassies were being secretly used to intercept phone calls and data across Asia as part of the US-led global spying network, the Sydney Morning Herald said.
The US-led spying network has drawn fire from other Asian countries as the row spreads.
Indonesia on Friday summoned the Australian ambassador over what it called the “totally unacceptable” activities.
Jakarta has also protested strongly to the United States over reports Washington had been monitoring phone calls and communication networks from its embassy in the Indonesian capital.