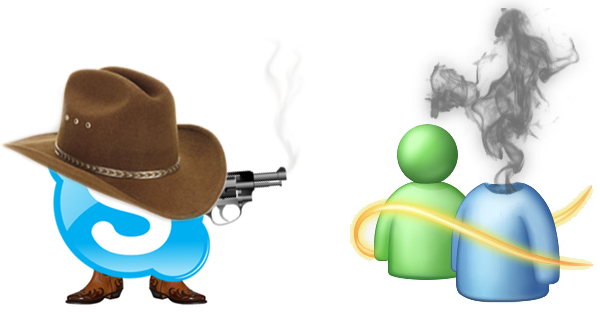 On March 15th Microsoft’s once dominant Messenger IM platform will go dark, signalling the end of an era for what can only be considered a pioneer in instant communication and social networking. The PC giant announced Wednesday that it is officially shutting down its instant messaging service, migrating all existing users over to Skype.

While certainly not the cutting edge communication technology it was a decade ago, when virtually everyone depended on the IM service to instantly (and cheaply) connect with friends, the 100 million or so people still using Messenger received an email this week informing them that their accounts would be moved to Skype, the popular communication service Microsoft acquired back in October 2011.

It’s a transition that shouldn’t have caught many by surprise, as Microsoft announced in November via blog post its plans to begin utilizing its Skype acquisition for its instant messaging services. While I’m sure some diehard Messenger purists are sad to see the platform go, if you’re anything like me this news likely sparks little more than a twinge of nostalgia for the platform that introduced many of us to social networking.

As mentioned, Microsoft first announced its plans to merge Messenger into Skype in a Skype related blog post in November, saying the transitions would be completely by Q1 of 2013. The email informing users of the switch was nebulously titled, “Important info about your Messenger Account,” a title that surely guaranteed the news ended up in your junk mail or simply dismissed as more annoying spam.

Although the transition spells the end of Microsoft’s Windows Messenger Live, don’t expect things to change much, except of course you’ll need to download Skype. As the email states, “Update to Skype and sign in using a Microsoft Account (same as your Messenger ID) and all your Messenger contacts will be at your fingertips. You’ll be able to instant message and video chat with them just like before, and also discover new ways of staying in touch with Skype on your mobile and tablet.”

To make this switch as smoothly as possible, current Messenger users will receive an annoyingly persistent popup reminder on their desktop client telling them to upgrade to Skype in order to prevent any disruption of service come March.

As Ian Paul of PCWorld explains, “Merging two accounts is fairly straightforward. At the Skype launch screen you just choose to sign in with a Microsoft account. Then Skype will ask you if you already have an existing Skype account. If you do, you enter your Skype login credentials, agree to merge your accounts, and then all your Skype and Messenger contacts will be available in one interface.”

Truth be told, while some may lament the passing of what was certainly both a pioneer and a mainstay of the IM world, such an upgrade is truly beneficial for all. Pangs of nostalgia aside, the days of simple text-based IMs are quickly coming to an end, replaced by a multi-channel approach to instant communication that incorporates text with video and voice, a service Skype has delivered to customers for years.

While Microsoft was tight-lipped about whether its VoIP acquisition would replace its Messenger service back in 2011, it was clear the Redmond Company had big plans for Skype, meaning the writing has been on the wall for Messenger for some time now. In the end, while it’s clearly the end of an era for a service that once played an integral role in my social life, I’m not sad to see it go…its all in the name of progress after all.