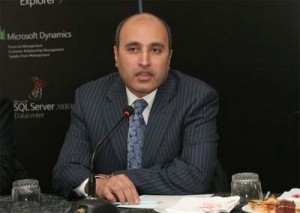 On the occasion Nawaz Sharif said that the joining of Ahmed Kamal shows that the people belonging to information technology and other modern fields rely on the program of PML-N.

Nawaz Sharif said that the PML-N in its previous tenures started latest programs of progress of people and laid the foundation of information technology in the country.

Nawaz hoped the Ahmed Kamal would prove an asset for the PML-N, adding that the PML-N after benefiting from the expertise of Kamal will introduce revolutionary program in the filed of information technology.

He said that Pakistan today needs people like Ahmed Kamal who could play their vital role for the progress of the country, adding that the PML-N has the team of professionals, adding that with the inclusion of Kamal this team will play its more effective role.

On the occasion Ahmed Kamal said that PML-N is the only party which in the leadership of Nawaz Sharif could bring the country out of crisis facing by Pakistan today and could lead the country to achieve its destination of self-reliance, independent and prosperity.