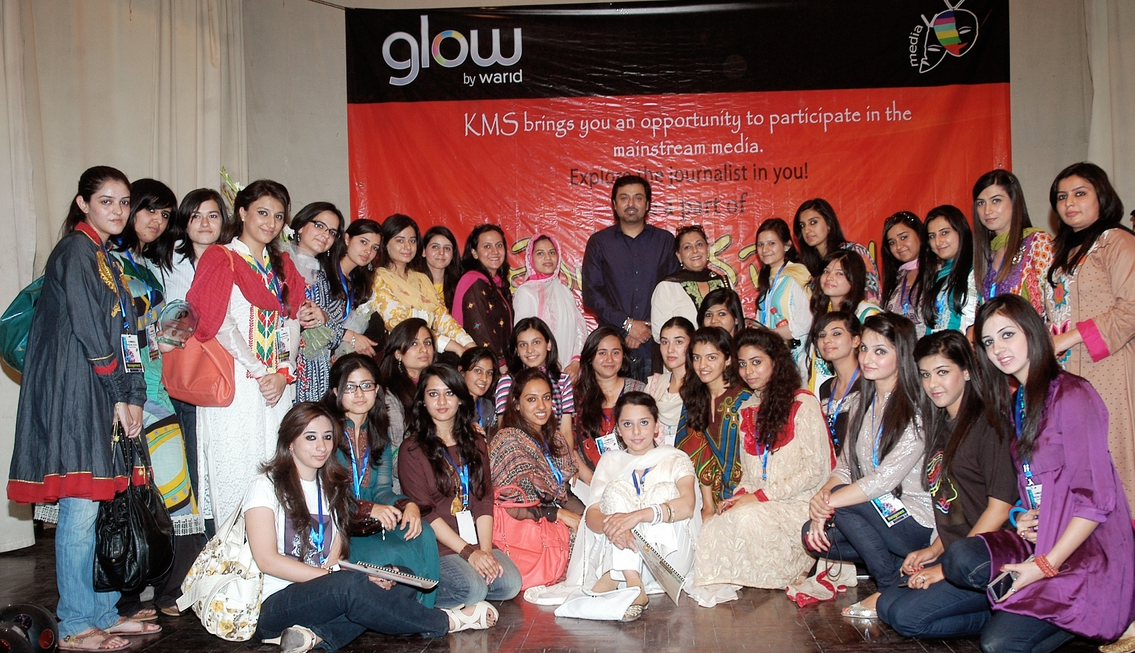 Being one of the most active, happening and aware brand – Glow by Warid continues supporting young leaders. This time, it was the Media Fest event of Kinnaird College for women which was presented by Glow. It was aimed at helping Media students unleash their talent and expose their inner journalistic skills.  KMS (Kinnaird Media Society), the college’s Mass Communication department, organized this festival in which over 550 KC students participated in four competitions including “Reporting LIVE From Kinnaird”, “News Bulletin Competition”, “Photo Essay Competition”, “The Round Table Talk Show” and short film competition.

The day one started with ‘Reporting Live from Kinnaird’ contest in which participants presented videos which was a coverage of staged acts by media studies students. It was judged by reporter Shumaila Jaffery and news anchor Ajmal Jami. The second half of the event comprised of ‘Photo Essay Competition’ in which various teams presented a sequence of photographs to narrate a story on their chosen topics.  Head of Media Studies Department Ms. Shazia Saeed presented Media Fest Glow shields to the judges as a token of gratitude and acknowledged the efforts of the teams for pioneering the first day of Media Fest in Kinnaird College.

Kinnaird College concluded its second day of the Media Fest with the competitions Roundtable – Talk Show competition and The Short Film Competitions. The second day started off with the talk show competition, judged by talk show host Mubashir Luqman. In total, 5 teams enacted talk shows on stage while their topics ranged from entertainment, social issues and education.  Shields were awarded to the winners and the participants received certificates.  Also present at the event as guests were news anchors Madiha Naqvi and Ajmal Jami. They had an interesting interactive session with the audience and appreciated the initiation of such events for enhancing the journalism skills of media students. For the Short Film Competition, Top 11 short films were screened at the event. The judges for the contest were television actors Noman Ijaz and Seemi Raheel. The topics for the short films comprised of various social issues. The winning film was ‘Subh Honay Tak,’ presented by the M.Phil student Sehrish. The event ended with a closing ceremony in which Media Fest Glow shields and certificates were handed over to the winners, participants, management, coordinating faculty members, KMS advisor Miss Shazia Saeed and President Werdah Munib by the judges.

Collectively outstanding efforts were made by each participant and students genuinely put their hearts in all what they presented in these competitions, especially highlighting the social issues of the society.  Glow by Warid always recognizes the potential and provides platform and means to the youngsters of our nation to show their talents. The KMS President appreciated the role of Glow for supporting them in conducting their first Media Fest successfully.

2012-05-08
Previous Post: First time, Nokia to launch mobile phones globally from Pakistan
Next Post: PTA has decided to control over the criminal, unethical and spam calls