Etisalat’s Afghanistan. Launched the first ever 3G services in Afghanistan 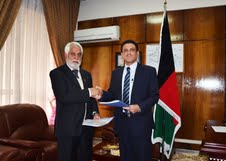 company in the Middle East, Asia and Africa, has launched the first ever 3G services in Afghanistan through its arm “Etisalat’s Afghanistan”.

“Today is an auspicious moment in the history of telecommunications in Afghanistan,” said Etisalat Afghanistan CEO, Ahmed Alhosani. “It calls for a celebration of a public-private partnership for connecting people and improving Afghan lives for many generations to come.”

This achievement comes after only four years of the launch of Etisalat Afghanistan, which is offering mobile services and has been ranked Number One in building the best networks in the country. Since its launch, Etisalat Afghanistan has gained a customer base of more than 3.5 million active subscribers in less than three years.

Mr. Alhosani congratulated H.E. Chairman ATRA Abdul Wakil Shergul and H.E. Amir Zai Sangin, Minister of Communications & IT, Government of Afghanistan for their vision which led to achieving this important milestone, as well for their continuous support to Etisalat to partner in the development of Afghanistan.

We are proud to be the first to launch 3G services in Afghanistan,” said Mr. Alhosany. “This shall certainly spur a new era of advanced development in Afghanistan while positively impacting every aspect of people’s lives.”

Mr. Alhosani said that through the launch of 3G services in Afghanistan, Etisalat has brought a rich understanding of technology, business and culture of communities to the country. “We consider ourselves a change agent in the future of economic development in the most dynamic regions such as Afghanistan,” he said, adding, “and we re-write the economic equations that govern the success of businesses and communities.”