By: admin
In: Broadband / Internet
With: 3 Comments

Apple has recently announced the follow-up to the last years iPad though there are no names yet from Apple which means no iPad3 or iPad HD. 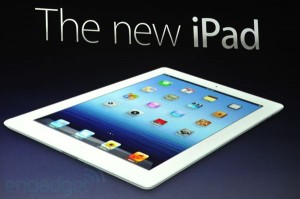 Apple improved the iPad’s screen resolution to there “Retina Display” technology, which means that the 9.7 inch screen has the resolution 2048×1536 and packs 264ppi. The new and improved iPad also has the A5x quad-core processor which Apple claims to be 4x faster than the new nVidia Tegra 3 quad-core SoC processor. Another thing that is improved on the iPad is its camera, it now packs a 5MP camera with a backside illuminated sensor with five-element lens and the 1080p video recording capabilities. As far as radio is concerned, it supports 4G LTE capability. Battery life should be good for the same 10hr GSM operations and 9hrs on 4G LTE. All of this is packed into the 9.5mm slim form-factor and 1.5 pounds in weight. It would be shipped in two variants black & white, starting at the cost of $499 for 16GB, $599 for 32GB and $699 for 62GB all 3G versions, while the 4G variants go for $629, $729, $829 respectively.