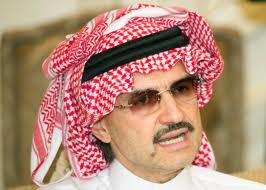 By: admin
In: Broadband / Internet
With: 59 Comments

Saudi Prince Alwaleed bin Talal and his investment company agreed to buy a USD 300 million stake in Twitter. The agreement to acquire a “strategic stake” in Twitter followed “several months of negotiations,” Kingdom Holding said in a statement to the Saudi bourse reported by Bloomberg. The company is controlled by Alwaleed, a nephew of Saudi Arabia’s King Abdullah. Twitter last held a new round of funding in August, raising money from DST Global, along with several past investors. The company aimed to raise about USD 800 million and was looking to use half the money to buy back shares from employees and earlier backers. The investment reportedly valued the messaging service at USD 8 billion. Twitter confirmed the new investment in an e-mail, but declined to give additional comments. Alwaleed is the biggest individual investor in Citigroup, and his other investments include stakes in GM, News Corp and Apple.