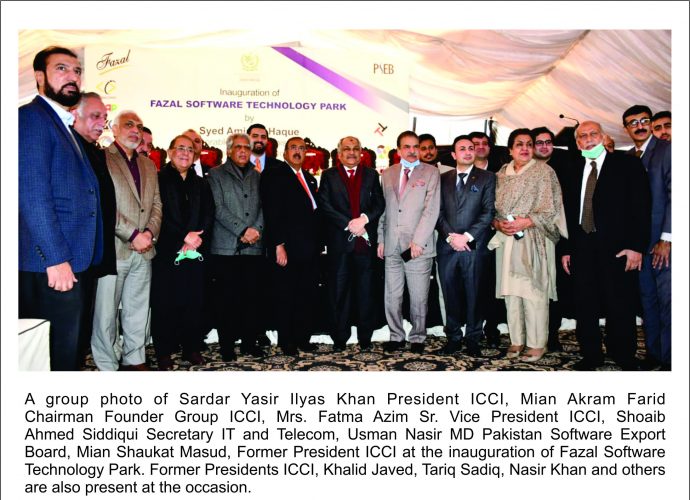 Prime Minister of Pakistan has the vision to promote IT Industry. Secretary MoIT

Government should make more efforts for the promotion of IT Industry. Sardar Yasir Ilyas khan

Mr.Shoaib Ahmed Siddiqui, Secretary Ministry of Information Technology and Telecom addressing at the inaugural ceremony of Fazal Software Technology Park at I-9 Industrial area, Islamabad  said that the Government is working hard for the promotion of IT industry and lauded the efforts of Fazal Industry for setting up the IT Technology Park. He said that the Prime Minister of Pakistan has the vision to promote IT Industry and in this connection Ministry of Information Technology & Telecom and Pakistan Software Export Board are focusing on the promotion of this sector. He said that a new Industrial Park is being established at Chakshahzad, Islamabad. He said that the Government is also working on the payment gateways to resolve the payment issues of the IT industry. He proposed that a forum should be created for ease of doing business including PASHA and other relevant organizations.

Mian Shaukat Masud, former President ICCI and CEO of Fazal Technology Park, said that IT is an emerging field in the country and thanked the Ministry of information Technology & Telecom and Pakistan Software Export Board for supporting this initiative. He said that the Government should ensure consistency of policies and more incentives should be given to the IT Industry for its growth and more exports.

Osman Nasir, Managing Director Pakistan Software Export Board appreciated the vision of Fazal Industry for developing Fazal Software Technology Park and turning it into a high yield industry. He said that the Government is determined to set up technology Parks across the country which will enable natural growth of the IT Industry.

Mr.Barqan Saeed, Chairman Pakistan Software House Association said that Pakistan needs to enhance its exports and IT Industry can play a good role in it. He said that it can also help in bringing foreign investment in the country and creating more employment.