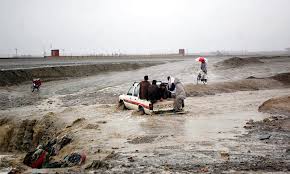 The National Highway was also closed in Bolan district, while landslides disrupted the traffic on the M-8 Gwadar-Ratodero Highway.

At least four people lost their lives in rain-related incidents in Balochistan, while a dozen villages and standing crops over a vast area were inundated in Kachho, Dadu district of Sindh after the Nai Gaj river burst its banks following heavy rains.

The Inter-Services Public Relations  said that recent rains and hill torrents caused damage to Nai Gaj river, breaching the flood protection embankment. Because of the hill torrents and the breach of the embankment, 12 villages were affected, it added.

The situation in Kachho aggravated Saturday morning when heavy rain and water from different streams and hill torrents in the district as well as the neighbouring Khuzdar and other areas of Kalat division in Balochistan flooded the Nai Gaj river.

The breach in Gaj riverbank took place in front of Moulvi Noor Mohammad village. The gushing water flooded several villages in five union councils. Though there was no fatality in the flooding but standing crops over a vast area were damaged, besides the killing of a number of cattle.

“The [affected] area is called Kachho and around 30 square kilometres area is under water,” Shabir Lashari, a local journalist, told The Express Tribune. “Villages near Johi, Wahi Pandhi, and Drigh Bala have been the worst-affected.”

Lashari and other local residents said that soon after the breach, the people from the different effected villages started moving to safer places. However, they added that many villagers were still stranded – with some on tree tops.

Gaj flows in the lap of the Khirthar mountain range. Authorities had built embankments [FB Bund] along its route in 1933 to protect the localities such as Johi and Wahi Pandhi and to divert the rainwater to Manchhar Lake.

“The breach has occurred in the river’s embankment and there is severe water pressure on the FB Bund [embankment], which is the final protection wall,” an official in the Sindh Irrigation Department said on condition of anonymity.

Sindh Irrigation Minister Sohail Anwar Siyal, who reached Kachho after the breach, said that heavy machinery had been deployed at the embankments of Gaj, while helicopters and boats would be arranged for rescue of the marooned villagers.

“We have written to the provincial disaster management authority to arrange the helicopters and boats to bring the stranded people to a safer place,” Siyal said. Hyderabad Commissioner Abbas Baloch added that the rescue operation would start Sunday morning.

Not only the Sindh government, but the army also moved in to help with the rescue efforts. According to the ISPR, army teams, including engineers with motor boats and medical teams, had reached the affected areas to carry out relief work and rescue stranded people. 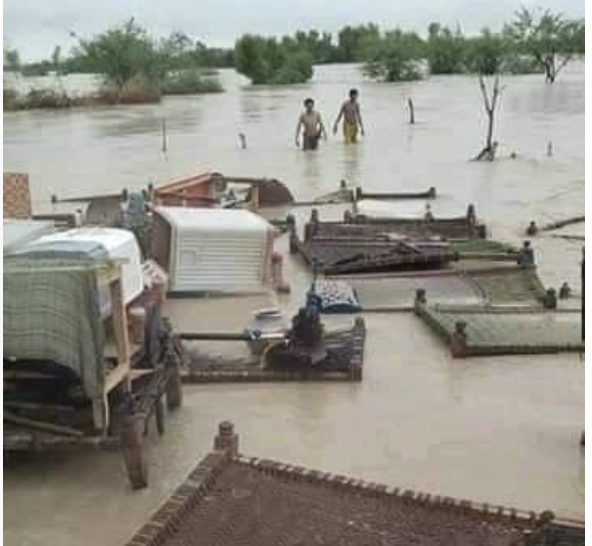 There were reports that Johi, which is the Taluka headquarters, faced the flood threat as the pressure mounted on the FB Bund. “The sensitive point of the FB Bund is hardly seven kilometres from our town,” Prof Aziz Kingrani, a Johi resident, told The Express Tribune.

Kingrani, however, expressed optimism that the situation would improve overnight. “The intensity of the rain is decreasing and I think water pressure will reduce by tomorrow [Sunday] morning, if there is no more rain,” he added.

There is no rain gauge installed in the area. But Lashari said that Met Office officials in Dadu had estimated 400 millimetres of rain in the hilly area. He added that villages, including Piyaro Loond, Sher Mohammad Talpur, Fatu Brohi, Bahawal Talpur and Shakhlani Loond, were also affected.

Asif Jamali, a resident of Wahi Pandhi, said that it was not the first time the area was hit by floods. More than 40 people died and 50 villages were washed away in the 1990s when heavy rains caused floods in the same area,” he said. “The mountains and steep hills increase the flooding risk.”

The Pakistan Peoples Party (PPP) provincial lawmaker and Sindh Chief Minister’s Rain Emergency focal person for Dadu, Fayyaz Butt, said that they were monitoring the situation. “We have heard that many villages have been cut off due to heavy rains. Efforts are afoot to rescue the stranded people.”

Elsewhere in the province, breaches occurred in canals in Garhi Khairo Tehsil of Jacobabad district, damaging houses and crops. Reports pouring in from different sources said that a 100-feet breach in Falak canal and a 60 breach in Mubarak minor created havoc in the area.

The Kachho area lies in the border regions between Sindh and Balochistan. Across Sindh’s boundary, the district administration of Khuzdar said rescuers evacuated four people stranded at the tourist spot Mola Chuttukh.

Balochistan Minister Saleem Khosa, while addressing a news conference on Saturday evening, told reporters that two people died in flash flood in the Dera Bugti district and one person died in Naseerabad after the roof of his mud house collapsed.

Khosa, accompanied by Provincial Disaster Management Authority (PDMA) Chairman Imran Zarkoon at the news conference, said that arrangements had been made to handle any emergency situation in the province.

The minister revealed that the Bolan River was overflowing in the Bolan district, where heavy machinery had been deployed to restore traffic on the highways.

“Chief Minister Kamal Khan has also ordered the agencies concerned to remain on high alert after the heavy downpour,” he added.

Zarkoon said that Jhal Magsi, Dera Bugti, Kohlu, Sibi and Khuzdar districts were the worst-affected by rains and floods. “Rescue teams have been deployed in all flood-affected districts to rescue people stranded in flash flood, while relief goods have been dispatched,” Zarkoon added.

Report from independent sources confirmed that dozens of mud houses collapsed in Khuzdar district. There were reports of two fatalities in Naseerabad, while Dera Bugti police said that two youths drowned in the suburbs of Pohli.

Officials said that Kalat, Khuzdar, Awaran, Lasbela, Ketch and Panjgur had been cut off from Gwadar after the flash flood damaged many bridges. Quetta also received the monsoon showers after a long hiatus, which broke the severe heat spell in the provincial capital.

As the weather turned pleasant, a number of families rushed to various picnic spots. “The weather has turned pleasant in the Quetta valley after the rain … we were praying for the rain,” Syed Ahmed, a citizen of Quetta, said.

The Sui Southern Gas Company (SSGC) said that the recent rain damaged two out of three main supply lines. A spokesperson said that a line broke that reduced the gas supply to Quetta and adjacent areas. He added that repair work had been initiated which would be completed by Sunday.

Media reports said that traffic was disrupted after a 30-foot wide crack appeared on the Coastal Highway. The rain also severed communication links in many villages of the Bolan district’s Machh town as the National Highway was damaged.

The National Highway was also closed in Bolan district, while landslides disrupted the traffic on the M-8 Gwadar-Ratodero Highway. The Sonari Bridge was swept away by the heavy rainfall and the area lost all ground communication with Sibi and Quetta.