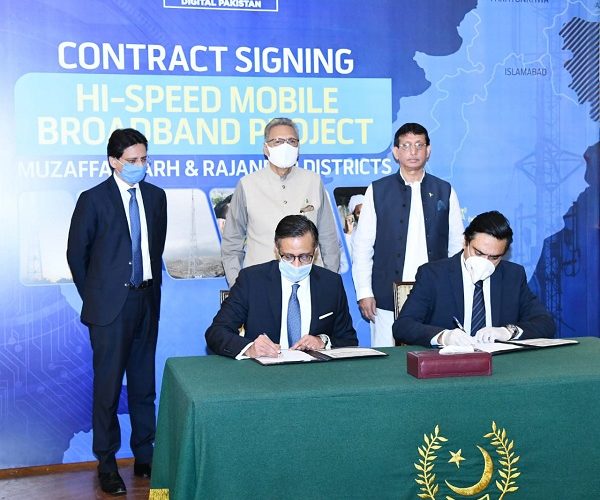 Pakistan on way to success through digital economy, education: President

President Dr Arif Alvi on Wednesday said Pakistan had immense potential in the field of digital economy and digital education and stressed the importance of fast data communication modes to explore vast opportunities in such areas.

“Pakistan has high prospects in making strides in digital economy, digital education and digital finance and is heading in right direction to cope with the challenges during current pandemic,” the President said in his address at the contract signing of high-speed mobile broadband projects in Muzaffargarh and Rajanpur districts, here at the Aiwan-e-Sadr.

President Alvi said the future highway to success was all about information gathering based upon internet and making it accessible for people.  He mentioned that the new life pattern during the coronavirus pandemic demanded digitalized systems in areas particularly trade, commerce, education and health.

He lauded the Ministry of Education for adopting new modes of teaching through television to address the challenges faced by students residing in towns with either low-speed internet or with no access. The President said Pakistan was proud to launch its first public-sector Virtual University in 2004, offering education at relatively low rates as compared to physically

attending institutions that had several other overheads.

The President said e-commerce and e-trade could prove a stimulus towards expansion of economy due to fast financial transactions. He said State Bank of Pakistan was working to launch digital payment system across the country in October, expressing confidence that the step would boost business across the board, including of small companies

Also, he said, software being top of the value-addition chain could prove as effective marketing tool for products and mentioned the country’s 30 percent improvement in software development scenario.  President Alvi said access to information through digitalization would also provide a platform for women to help them thrive, thus ensuring their empowerment.

He said digital information could also eliminate ‘elite capture’ of resources and quoted the book ‘Capital and Ideology’ by French economist Thomas Piketty who defined education and health as two top areas of such notorious culture. He said Pakistan through reforms was resisting the elite capture, however India on the contrary, was reported with high inequality during 2014 to 2018, as mentioned by the French economist with full supporting data.

effectively sort out matters related to installation of signal towers at people’s land. President Alvi said internet could be best used for improving skilled economy and mentioned that as Pakistan required one million nurses in health sector, online training courses could be a great option instead of brick and mortar education.

Federal Minister for Information Technology and Telecommunication Syed Amin ul Haque said the government was committed to promote the country’s technological capacity to develop and produce a globally competitive IT sector and industry. He said provision of 3G and 4G service to the far-flung areas of Balochistan, Khyber Pukhtunkhwa and Gilgit Baltistan would also be ensure in near future.

He said in line with the vision of Digital Pakistan, the Ministry of IT and Telecom through Universal Service Fund was running diverse projects, which were playing an important role in the socio-economic benefit of people.

Speaking on the occasion, Irfan Wahab Khan, CEO Telenor Pakistan said, “We are committed to empowering the country with enhanced connectivity that creates a positive impact through reducing inequalities and uplifting millions of lives. Today, we are one step closer to bridging the digital gap by providing 2 million people of Muzaffargarh and Rajanpur with the fastest mobile broadband services. Our core purpose at Telenor Pakistan is to empower societies and create opportunities for every Pakistani, especially those living in underserved areas.”