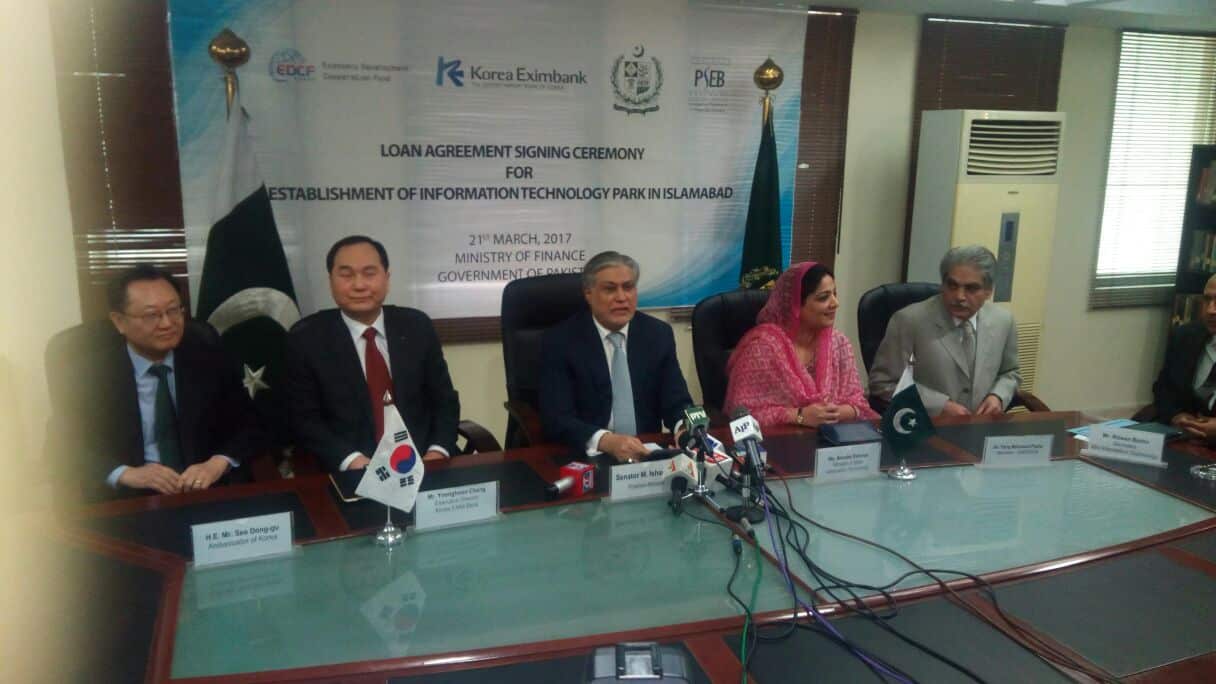 Islamabad was signed between Government of Pakistan and Korean EXIM bank on Tuesday.

The ceremony was witnessed by the Finance Minister, Ishaq Dar, Minister for IT Anusha Rehman, and Korean Ambassador to Pakistan Dong-gu Suh.

The information technology park would be constructed in the Chak Shahzad area of Islamabad at a cost of US$ 88.383 million (Rs. 9.2 billion) including a loan of US $ 76.3 million from Korean Exim Bank under the Economic Development Cooperation Framework (EDCF) arrangement. It may be mentioned that EDCF arrangement worth US $500 million was signed with Korea in October 2015.

The IT park would be spread over an area of 45 acres, and provide half a million sq ft of office space for 5000 knowledge workers. It would house an incubation center for start ups, a data center, and allied facilities like day care centers, gyms, and sports facilities.

Finance Minister Ishaq Dar welcomed signing of the agreement and said it was the first multi-purpose IT Park being built in Pakistan. It would provide conducive environment where IT companies would be able to work together and leverage each other’s expertise. The park, he said, would not only attract investment but also help generate IT exports.

Dar thanked the Korean Government for their continued support. He invited Korean Exim Bank to have representative office in Pakistan which, he said, would facilitate in better coordination between the Bank, EAD and other executing agencies.

Speaking on the occasion Anusha Rehman said that the IT Park is a major step towards realizing the goal of digital Pakistan. She said that it would provide a complete ecosystem for promotion of IT in the country in combination with other IT and Telecom initiatives being carried on by the Ministry of IT.

Anusha Rehman said that the provision of quality work space would encourage IT companies to shift to Pakistan and in the process strengthen the exports as well as create jobs for the local youth. She said that it would be the first in the series of IT Parks to be built in the country. In the next phase, similar state-of-the-art IT Parks will be built in Karachi and Lahore.

Executive Director of Korean Exim Bank, Mr. Younghoon Chang on the occasion said he felt greatly honoured attending the signing ceremony. Pakistan was making headway in the field of IT. Pakistan’s digital landscape would be further expanded through the new IT park. He said the project would benefit the whole of Pakistan. Mr. Younghoon added that Korean Exim Bank would continue to partner Pakistan in its socio-economic development.